When You Greet Me I Bow: Notes and Reflections from a Life in Zen 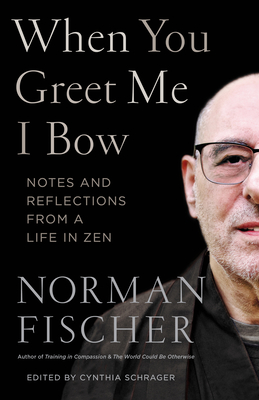 When You Greet Me I Bow: Notes and Reflections from a Life in Zen

By  Norman Fischer , Editor  Cynthia Schrager
$ 17.95
Out of Stock In Store (Click to Order)

"Looking backwards at a life lived, walking forward into more life to live built on all that, trying not to be too much influenced by what's already been said and done, not to be held to a point of view or an identity previously expressed, trying to be surprised and undone and maybe even dismayed by what lies ahead."--Norman Fischer

Norman Fischer is a Zen priest, poet, and translator whose writings, teachings, and commitment to interfaith dialogue have supported and inspired Buddhist, Jewish, and other spiritual practitioners for decades. When You Greet Me I Bow spans the entirety of Norman Fischer's career and is the first collection of his writings on Buddhist philosophy and practice. Broken into four sections--the joy and catastrophe of relationship; thinking, writing, and emptiness; cultural encounters; and social engagement--this book allows us to see the fascinating development of the mind and interests of a gifted writer and profoundly committed practitioner.

NORMAN FISCHER is a Zen teacher, poet, translator, and founder of the Everyday Zen Foundation. A beloved figure in the Buddhist world, he is also well-known for his efforts at interreligious dialogue. His numerous books include, most recently, (prose) The World Could Be Otherwise: Imagination and the Bodhisattva Path, What Is Zen?: Plain Talk for a Beginner's Mind, and Training in Compassion: Zen Teachings on the Practice of Lojong, and (poetry) The Strugglers, On A Train At Night, and Untitled Series: Life As It Is.