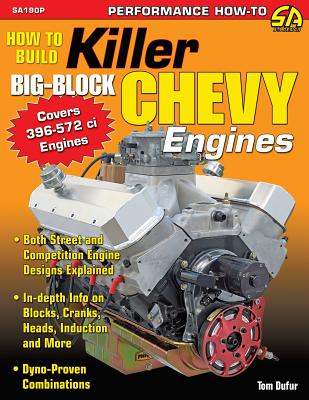 By  Tom Dufur
Paperback
$ 32.95
Out of Stock In Store (Available to Order)

The photos in this edition are black and white.

Since its introduction in 1965, the big-block Chevy engine has been a force to be reckoned with on both the street and track. Over the past four decades, the big-block has undergone a constant evolution toward greater efficiency and durability. It's also picked up more displacement, as General Motors is now offering crate engines up to 572 ci, and aftermarket versions have gone much larger still.

In How to Build Killer Big-Block Chevy Engines, author Tom Dufur reviews the commonly available factory parts along with many aftermarket offerings, and discusses the advantages of both. Additionally, he includes popular buildup recipes and showcases the dyno results, proving theories and sharing in-depth research. Dufur's decades of experience designing, assembling, tuning, and racing the big-block Chevy engine truly shines through. A wealth of full-color photos, charts, and graphs makes it easy to understand the critical points of these great engines.

In-depth chapters on design, engine preparation, and assembly show you how to develop your own big-block Chevy to its full potential. Whether your big-block is destined for life in a street car, a race car, or even a boat, the wealth of information in this book will ensure it has ample power and longevity once it's all together.