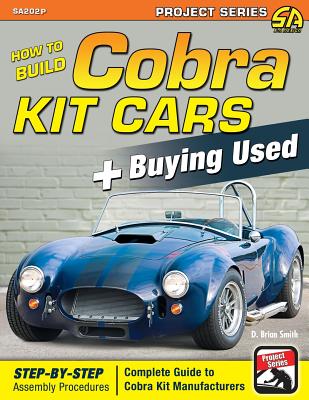 The photos in this edition are black and white.

The original Shelby Cobra left an indelible imprint on the automotive landscape. This nimble English roadster, powered by a raucous Ford V-8, set new performance standards, won countless races, and became an iconic supercar. The Shelby Cobra was only in production for six short years and only about 1,000 cars were ever made, but Cobra aficionados yearned for and revered these cars. Then, beginning in the late 1970s, companies manufactured and sold Cobra replicas as a kit car, so enthusiasts could build one in their garage, and other companies eventually offered complete rolling chassis as well as complete new cars.

Author D. Brian Smith, former editor-in-chief of Kit Car magazine, shows you each crucial step for assembling a modern Cobra replica, and in particular, he profiles assembling the most popular Cobra kit car: the Factory Five Cobra Mk4. He guides you through selecting the right Cobra kit car for a particular budget and performance goals, and then shows how to plan, budget, and use the necessary tools. Detailed step-by-step captions and photos show you how to assemble each major component group of the car so you assemble a strong running, reliable, and safe Cobra replica.

Also included in this informative guide is how to buy a pre-owned Cobra replica. It shows you how to inspect, evaluate, and test drive used Cobra kit cars for those who prefer to purchase one already assembled.