The Opposite of Hate: A Field Guide to Repairing Our Humanity 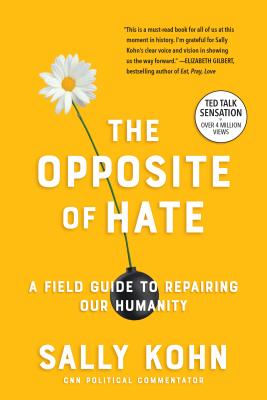 The Opposite of Hate: A Field Guide to Repairing Our Humanity

“Brilliantly illustrates the immense and disarming power of changing course and driving not toward division, but toward civility and mutual respect.”  --Ms. magazine As a progressive commentator on Fox News and now CNN, Sally Kohn has made a career out of bridging intractable political differences. In this age of dangerous partisan resentment and rising bigotry, she decided to investigate hate itself--to better consider how we can stop it. With her trademark humor and humanity, Kohn introduces us to leading researchers and scientists who are exploring the evolutionary and cultural roots of hate. She travels to Rwanda, to the Middle East, and across the United States, talking with former terrorists and reformed white supremacists, and even sitting down with some of her own Twitter trolls. What she discovers is surprising: All of us harbor hate but the powerful acknowledgment that we are all in this together can lead us out of the wilderness. The opposite of hate is connection.

Sally Kohn is one of the leading progressive voices in America. She is currently a columnist and CNN political commentator. Previously a Fox News contributor, she has been a frequent guest on MSNBC and writes for media outlets, including the Washington Post,the New York Times, New York Magazine, Cosmopolitan,the Daily Beast, Time, and many others. Kohn lives in Brooklyn with her partner, Sarah Hansen, and their daughter, Willa.