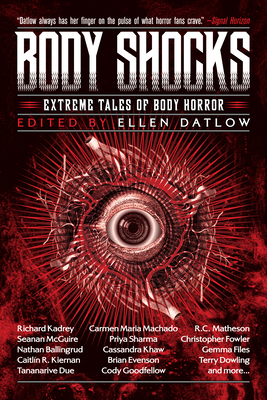 Bestselling editor Ellen Datlow (Lovecraft's Monsters) presents body horror at its most wide-ranging and shocking best. Discover twenty-nine intricate, twisted tales of the human body, soul, and psyche, as told by storytelling legends including Carmen Maria Machado, Richard Kadrey, Seanan McGuire, Caitl n R. Kiernan, Nathan Ballingrud, Tananarive Due, Cassandra Khaw, Christopher Fowler, and many more. The most terrifying thing that you can possibly imagine is your own body in the hands of a monster. Or worse, in the hands of another human being In this definitive anthology of body horror selected by a World Horror Grandmaster, you'll find the unthinkable and the shocking: a couture designer preparing for an exquisitely grotesque runway show; a vengeful son seeking the parent who bred him as plasma donor; a celebrity-kink brothel that inflicts plastic surgery on sex workers; and organ-harvesting doctors who dissect a living man without anesthetic.