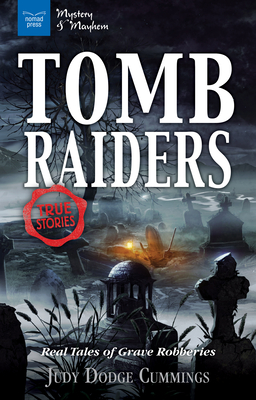 By  Judy Dodge Cummings
Hardcover
$ 19.95
Out of Stock In Store (Available to Order)

The dead do not always rest easy. Armed with shovels and crowbars, thieves throughout history have unearthed graves for greed, hunger, and knowledge.

Tomb Raiders: Real Tales of Grave Robberies recounts little-known stories of body snatchers and crooks of the crypt. For example, when colonists in Jamestown, Virginia, dug up the dead in 1609, they were after food. During this "Starving Time," settlers ate horses, dogs, cats, and rats. When that food ran out, people resorted to cannibalism to survive. Another reason to rob graves? Science To learn human anatomy, medical students in New York City in 1788 dissected corpses snatched from nearby graveyards. And then there was President Abraham Lincoln, who was entombed in a vault in Springfield, Illinois. In 1876, a gang of counterfeiters schemed to steal Lincoln's corpse and hold it for ransom.

Another good place to do some grave robbing was the Valley of the Kings in 1881. Thousands of years earlier, priests had hidden the monarchs here to protect them from grave robbers of ancient times. A little closer to our own time, poverty again lured tomb robbers to the dirt hill outside Sip n, Peru. Poor sugarcane farmers had been digging holes in this mud brick pyramid for decades, occasionally finding a piece of cloth or pottery shard. But one night in 1987, a tunnel collapsed on a grave robber, burying him in treasure.

In these five tales of historic grave robberies, readers will encounter adventure, intrigue, and suspense with a grain of the grisly This is the seventh book in a series called Mystery & Mayhem, which features true tales that whet kids' appetites for history by engaging them in genres with proven track records--mystery and adventure. History is made of near misses, unexplained disappearances, unsolved mysteries, and bizarre events that are almost too weird to be true--almost The Mystery and Mayhem series delves into these tidbits of history to provide kids with a jumping-off point into a lifelong habit of appreciating history.

The five true tales told within Tomb Raiders are paired with maps, photographs, and timelines that lend authenticity and narrative texture to the stories. A glossary and resources page provide the opportunity to practice using essential academic tools. These nonfiction narratives use clear, concise language with compelling plots that both avid and reluctant readers will be drawn to.

Nomad Press books in the Mystery & Mayhem series introduce readers to historical concepts and events by engaging them in an extremely popular genre--real-life adventure and mystery. Readers ages 9 to 12 are fascinated with the strange-but-true tales that populate history, and books in this series offer compelling narrative nonfiction paired with concise language that appeals to both voracious and reluctant readers. Nomad's unique approach to the study of history uses tantalizing tales based in factual knowledge that encourage a lifelong curiosity in the historical events that shape our world.

Judy Dodge Cummings is a writer and former history teacher from Reedsburg, Wisconsin. She has a MFA in Creative Writing for Children and Teens from Hamline University and is the author of numerous nonfiction books on historical topics. Her other books in the Mayhem and Mystery series are Great Escapes: Real Tales of Harrowing Getaways and Rebels & Revolutions: Real Tales of Radical Change in America.