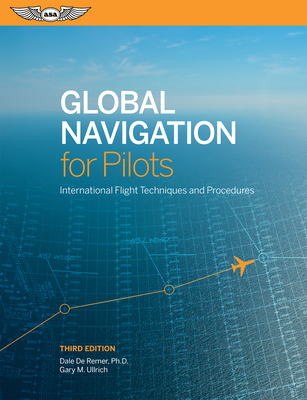 By  Dale de Remer , Gary Ullrich
Paperback
$ 59.95
Out of Stock In Store (Available to Order)

Flight accomplished over longer distances and across international borders takes special knowledge; this book is for pilots who want to know more about both the planning and execution of international flights, from the basic knowledge of air navigation expected of an instrument-rated private pilot, and onward. This Third Edition of Global Navigation for Pilots: International Flight Techniques and Procedures is written and updated by Dale DeRemer, Ph.D. and Gary Ullrich, and serves as the continuation of what has been the definitive textbook on the subject since 1993.

This book covers long-range and trans-oceanic navigation techniques and procedures, and international flight planning, systems, and regulations. Topics include: GPS, RVSM airspace, featureless terrain navigation, celestial concepts important to pilots, ICAO aircraft registry information, and how to get your flight department ready to fly internationally. Study questions or classroom exercises included with most chapters. Fully illustrated in color, and includes glossary and index.

Dr. Dale DeRemer has flown many types of airplanes, and is also an experienced mariner, well versed in the ways of the water, having lived aboard his 46' sailboat for seven years while sailing it over 70,000 miles. Dale was inducted into the EAA-NAFI Flight Instructor Hall of Fame in 1999, and named Professor Emeritus of Aviation by the University of North Dakota College of Aerospace Sciences in 2000 after 20 years of teaching aviation subjects at the university level.While completing his Master of Science and Ph.D. at Utah State University, flying became a part of everyday life for Dale. During his career, he has served as corporate pilot, agricultural pilot and chief pilot for his own and other companies. He has logged over 24,000 hours total time in general aviation aircraft of many types. He holds ATP, CFI-A, CFI-H, CFI-I and MEI licenses with single- and multi-engine land and sea, rotorcraft-helicopter and instrument ratings. For 17 years, Dale taught advanced wilderness seaplane pilot courses to pilots from many states and several foreign countries, venturing far north into the Canadian boreal forest and arctic tundra waters. He has also been a central northwest Field Director for the Seaplane Pilots Association.Gary M. Ullrich--Before joining the University of North Dakota, Professor Ullrich was a Test Group Pilot for FlightSafety, Adjunct Assistant Professor for Embry Riddle Aeronautical University, and Chief of Safety/Instructor/Evaluator Pilot with the United States Air Force. While working at FlightSafety, Gary helped to create their ISO 9001 Program. He joined UND Aerospace in 2006. He currently teaches Aviation Safety, Safety Management Systems (SMS), Aircraft Accident Investigation, Advanced Aerodynamics, and Long Range Navigation & International Procedures. Gary is a commercial pilot with multi-engine, instrument, and Boeing 720/707 type ratings.