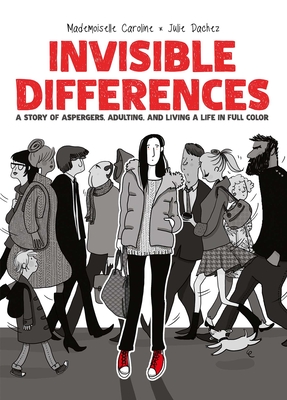 By  Julie Dachez , Illustrated By  Mademoiselle Caroline
$ 19.99
Out of Stock In Store (Click to Order)

Translated for the very first time in English, Invisible Differences is the deeply moving and intimate story of what it's like to live day to day with Asperger Syndrome.

"This soulful and serious look at Asperger’s syndrome brings an informed and optimistic perspective to the fore." — Publishers Weekly

Marguerite feels awkward, struggling every day to stay productive at work and keep up appearances with friends. She's sensitive, irritable at times. She makes her environment a fluffy, comforting cocoon, alienating her boyfriend. The everyday noise and stimuli assaults her senses, the constant chatter of her coworkers working her last nerve. Then, when one big fight with her boyfriend finds her frustrated and dejected, Marguerite finally investigates the root of her discomfor: after a journey of tough conversations with her loved ones, doctors, and the internet, she discovers that she has Aspergers. Her life is profoundly changed – for the better.

I graduated from ESCP and hold a PhD in social psychology. After being diagnosed with Asperger's autism at the age of 27, I decided to change my life. Far from being a burden, this diagnosis allowed me to learn to love myself and to express my personality as I had never dared to do before. Passionate about human and social sciences, my two favorite subjects are autism and feminism. I am a transmedia actress and I express myself as well on my blog as on Youtube , which combines with them two more than two million views. In collaboration with Mademoiselle Caroline I published an autobiographical comic, The invisible difference , published by Delcourt editions in September 2016. I am also the author of Dans ta bulle! published by Marabout in April 2018. In conference and training, I show another vision of autism, far from clichés and sensationalism. Considering autism not as a disability but as a difference, I seek to make a voice heard that is still a minority.

Mademoiselle Caroline was born in Paris a few years back. She’s the author of several humorous and autobiographical albums including Chute Libre and Carnets du Gouffre, a story about living with depression that has attracted the attention of the media and readers. In 2016, La Différence Invisible was first released in France. Also: she skis a lot (with class and distinction), plays rugby (with panache and severity), walks a lot (with courage and tenacity), and cares for her three children of two different ages (c’est possible!).