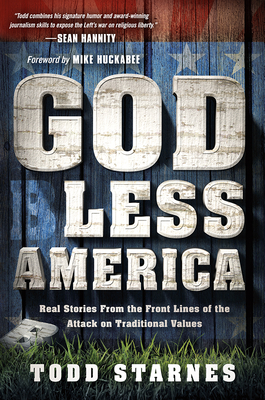 Pay attention, people of faith. Dark clouds are gathering. The winds of intolerance are blowing. There's a great storm approaching.

American Christians are facing uncertain times. Our nation's values are under assault. Religious liberty has been undermined. We live in a day when right is now wrong and wrong is now right. The vicious leftwing attack against the recent traditional marriage stance of Chick-fil-A should serve as a wakeup call to people of faith. It's not about a chicken sandwich. It's about religious liberty. It's about free speech. It's about the future of our nation. As a reporter covering the culture war for FOX News, Todd Starnes is on the front lines of these attacks against traditional values. In God Less America, he uses both recent news stories and compelling interviews with today's top conservative leaders to bring to light what is happening across our country. In his award-winning, satire-meets-serious writing style, he strikes an important blow in today's culture wars.

Todd Starnes is the host of FOX News & Commentary--heard daily on the Fox News Radio network. Throughout his journalism career, Todd has covered a number of high profile stories, taking him from Wall Street to the White House. He has made regular appearances on FOX & Friends and Hannity's America. His work is heard on hundreds of radio stations around the nation, and his website, www.toddstarnes.com, is read by more than two million people monthly. He's the author of They Popped My Hood, Found Gravy on the Dipstick, and Dispatches from Bitter America.