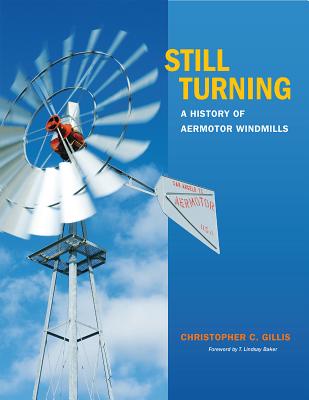 The Aermotor Windmill Company, which commenced operations in Chicago in 1888, is the nation’s sole remaining full-time manufacturer of water-pumping machines. The company’s imprint on rural America, particularly across the West, is still visible today in the tens of thousands of its windmills that bring water to the earth’s surface. Still Turning is the first book to explore the rise of the American windmill through the experience of this important company.

Aermotor founder La Verne Noyes and engineer Thomas Perry developed and perfected the all-metal wind pump in the 1880s. Within a decade, the “mathematical windmill” began to dominate the market. Aermotor continued to expand and innovate.

The ruggedness and simplicity of the American mechanical windmill has allowed it to outlast many newer water-pumping technologies over the years with minimal maintenance and oversight.

Christopher C. Gillis traces this story and more, from the early days of the company to Aermotor’s present-day relevance as it continues to produce its iconic windmills. Still Turning is a significant contribution not only to the history of wind power but also to the history of American enterprise.

CHRISTOPHER C. GILLIS is the editor of American Shipper and The Windmiller’s Gazette. He lives in Frederick, Maryland.