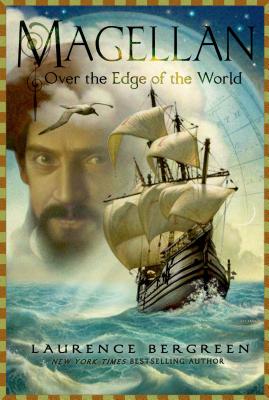 A middle-grade adaptation of Laurence Bergreen's adult bestseller, about Magellan's historic voyage around the globe.

On September 6, 1522, a horribly battered ship manned by eighteen malnourished, scurvy-ridden sailors appeared on the horizon near a Spanish port. They were survivors of the first European expedition to circle the globe. Originally comprised of five ships and 260 sailors, the fleet's captain and most of its crew were dead. How did Ferdinand Magellan's voyage to circle the world—one of the largest and best-equipped expeditions ever mounted—turn into this ghost ship? The answer is provided in this thoroughly researched tale of mutiny and murder spanning the entire globe, marked equally by triumph and tragedy. Thrilling, grisly, and completely true, Magellan: Over the Edge of the World tells a story that not only marks a turning point in history, but also resonates powerfully with the present.

Laurence Bergreen is an award-winning biographer whose previous titles include Columbus: The Four Voyages, Voyage to Mars: NASA's Search for Life Beyond Earth, Louis Armstrong: An Extravagant Life, Capone: The Man and the Era, As Thousands Cheer: The Life of Irving Berlin, and James Agee: A Life, each considered the definitive work on its subject. His work has been translated into twenty-five languages worldwide. He has written for many national publications, including the New York Times and the Wall Street Journal, and has taught at the New School for Social Research. A graduate of Harvard University, he lives in New York City.