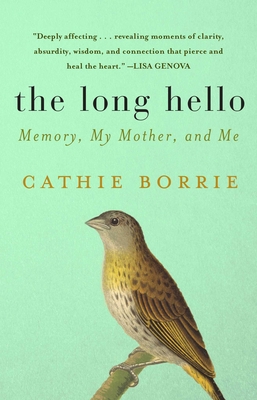 A powerful, ground-shifting account of caring for a parent with Alzheimer's about which Maya Angelou exclaimed, "Joy!"

Since Cathie Borrie delivered her keynote performance at the World Alzheimer's Day event sponsored by the Community and Access Programs of the Museum of Modern Art, her self-published manuscript has won rapturous praise from noted writers and Alzheimer's experts alike, from Maya Angelou, Lisa Genova, and Molly Peacock to Dr. Bill Thomas, Jed A. Levine of the Alzheimer's Association, NYC, and Meryl Comer of the Geoffrey Beene Foundation Alzheimer's Initiative. Now it is available to the general public for the first time in a trade edition.

The Long Hello distills the seven years the author spent caring for her mother into a page-turning memoir that offers insight into the "altering world of the dementia mind." During that time, Borrie recorded brief conversations she had with her mother that revealed the transformations within—and sometimes yielded an almost Zenlike poetry. She includes selections from them in chapters about her experience that are as evocative as diary entries. Her mother was the emotional pillar and sometime breadwinner in a home touched by a birth father's alcoholism, a brother's early death, divorce, and a stepfather's remoteness. In Borrie's spare prose, her mother's story becomes a family's story as well a deeply loving portrait that embraces life.

Cathie Borrie trained as a nurse in Vancouver and holds a Master of Public Health from Johns Hopkins University. She also graduated from the University of Saskatchewan with a degree in law, and she has studied creative writing at Simon Fraser University. She lives in North Vancouver.