Let them Eat Tweets: How the Right Rules in an Age of Extreme Inequality 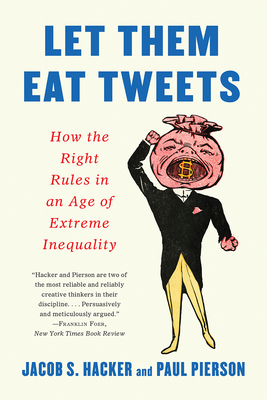 Let them Eat Tweets: How the Right Rules in an Age of Extreme Inequality

An “essential” (Jane Mayer) account of the dangerous marriage of plutocratic economic priorities and right-wing populist appeals — and how it threatens the pillars of American democracy.

In Let Them Eat Tweets, best-selling political scientists Jacob S. Hacker and Paul Pierson argue that despite the rhetoric of Donald Trump, Josh Hawley, and other right-wing “populists,” the Republican Party came to serve its plutocratic masters to a degree without precedent in modern global history. To maintain power while serving the 0.1 percent, the GOP has relied on increasingly incendiary racial and cultural appeals to its almost entirely white base. Calling this dangerous hybrid “plutocratic populism,” Hacker and Pierson show how, over the last forty years, reactionary plutocrats and right-wing populists have become the two faces of a party that now actively undermines democracy to achieve its goals against the will of the majority of Americans. Based on decades of research and featuring a new epilogue about the intensification of GOP radicalism after the 2020 election, Let Them Eat Tweets authoritatively explains the doom loop of tax cutting and fearmongering that defines the Republican Party—and reveals how the rest of us can fight back.

Jacob S. Hacker is a political scientist at Yale University, and the coauthor of three books, including the New York Times bestseller Winner-Take-All Politics. He lives in New Haven, Connecticut.


Paul Pierson is a political scientist at the University of California, Berkeley, and the coauthor of three books, including the New York Times bestseller Winner-Take-All Politics. He lives in Berkeley, California.