Hemingway's Paris: A Writer's City in Words and Images 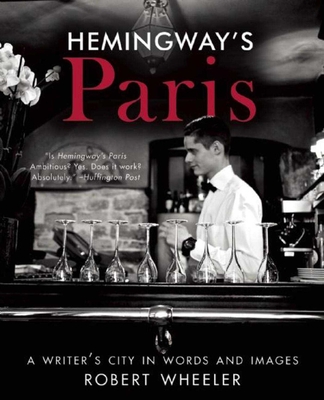 Hemingway's Paris: A Writer's City in Words and Images

For the first time in trade paperback, experience Hemingway’s Paris in all its beauty and grandeur. In gorgeous black-and-white images, Hemingway’s Paris depicts a story of remarkable passion—for a city, a woman, and a time. No other city in any of his travels was as significant, professionally or emotionally, as Paris. And it remains there, all of the complexity, beauty, and intrigue that Hemingway describes in the pages of so much of his work.

It is all still there for the reader and traveler to experience—the history, the streets, and the city. Restaurants, hotels, homes, sites, and favorite bars are all detailed here. The ninety-five black-and-white photographs in Hemingway’s Paris are of the highest caliber. The accompanying text reveals Wheeler’s deep understanding of Hemingway: his torment, his talent, the obstacles he faced, and the places of refuge needed to nurture one of the preeminent writers of the twentieth century.

Moved by the humanistic writing of Hemingway, Wheeler was inspired to travel throughout France, Italy, Spain, Africa, and Cuba, where he has sought to gain insight into the motivation behind Hemingway’s books and short stories. As a teacher, lecturer, and photojournalist, he set out to capture and interpret the Paris that Ernest Hemingway experienced in the first part of the twentieth century. Through his journal and photographs, Wheeler portrays the intimate connection Hemingway had with the woman he never stopped loving, Hadley, and with the city he loved most, Paris.

Robert Wheeler fondly recalls time spent with his daughters along Boston’s Freedom Trail, from pushing a stroller, to walking hand-in-hand. The rich and fascinating stories evoked by each historic site, as well as the exceptional charm of Boston’s quaint city streets, shops, and restaurants, lured him back again and again, inspiring this sensory and absorbing book. Robert is also the author of Hemingway’s Paris: A Writer’s City in Words and Images and Hemingway’s Havana: A Reflection of the Writer’s Life in Cuba. He lives near the sea in New Castle, New Hampshire, with his wife, Meme.