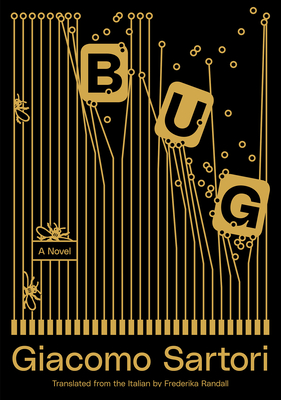 By  Giacomo Sartori , Translator  Frederika Randall
$ 18.00
On Our Shelves Now

With the wicked humor and imagination that made readers fall in love with his novel I Am God, Giacomo Sartori brings us a madcap story of family dysfunction, (dis)ability, intelligent robots, bees, and a family of misfit savants living outside the bounds.

In the singular world of the young, deaf narrator of Bug, there are just a handful of people who try to understand him when he gets into trouble at school. His father, a data analyst for Nutella whose real job is to pinpoint terrorists, is clueless about humans in real life. His brilliant brother, called IQ in public and Robin Hood in the hackersphere, has his back but is ever busier training his robot. His grandfather, a retired anarchist-guerilla-turned-nematologist, chides him for misbehaving when he takes him hunting for worms. Meanwhile, his Buddhist beekeeper mother, ordinarily his closest confidante, has been in a coma ever since a terrible car accident.

Just when the family's survival in their converted chicken coop seems most precarious, someone--or something--new enters his life: Bug. This self-declared fast friend seems to know all about his family and has some creative, if not strictly legal, ideas about how to help....

Praise for I Am God

"I Am God is an almost outrageously charming book.... Giacomo Sartori takes a simple, playful premise and sets the universe crazily spinning. The Italian writer has conjured up a delicious, comical stream of omniconsciousness: a pensive diary by the original omniscient narrator, God. Sartori's God, a being of authentic complexity and paradoxical humanity, of both otherworldly dignity and satirical absurdity, is an irresistible character.... His withering pronouncements resemble the dry, intelligent wit of a celestial Oscar Wilde more than the crash of vengeful thunderbolts from on high. And his aim is true.... Sartori's humor, godlike, infus es] every part of the book from the premise to the plot to the venal, amiably clueless characters to the language of the diary narrated in the celestial being's intelligent, deadpan voice.... The elegant, easy-going translation by Frederika Randall is convincing and conversational, reveling in the diary's asides, footnotes, and parentheses in which God is constantly setting the record, and the reader, straight.... Sartori has bestowed on us a narrative that is both comforting and disconcerting. His main character is preposterous and genuine, a supremely confident supreme being discovering the immensity of human insignificance, the wonders of confusion and vulnerability, the limitless frustrations of language and love and, of course, sex.... He's large, he contains multitudes, and he is the ultimate unreliable narrator."

"The narrator of Sartori's hilarious, insightful novel, his first to be published in English, is none other than God, a proper monotheistic deity stirred in a very human way by one of his own creations.... On page after laugh-out-loud page, this articulate God--and author--cover just about every cynical and lofty concept concerning one's own existence that humans ever pondered. This is an immensely satisfying feat of imagination."

"Who better to reflect on the state of the planet than its creator? I Am God is by turns funny, sad, outrageous, and tender--a cosmic romp."

"A highly original novel, showing that there is, thankfully, more to Italian fiction than Elena Ferrante."

"This novel is an utterly serious and wildly comic test of the strange idea we take for granted in reading prose fiction--the pretense of the omniscient narrator.... By speaking in the voice of God, Sartori has simplified the premise and complicated the result of writing as such.... This God is] the brilliant, hilarious, and utterly believable creation of Sartori."

"I Am God is like a mirthful dream made real by the ingenuity of Sartori's prose and Randall's splendidly pointed and sly translation."

"In this riotous philosophical romp, Sartori has invented an omniscient narrator like no other and an identity crisis with truly cosmic implications. Poignant, hilarious, and serious by turns, this is a jeu d'esprit with both heart and mind."

About the Author: The novelist, poet, and dramatist Giacomo Sartori was born in 1958 in Trento, Italy. He is an agronomist specializing in soil studies. Sartori has published seven novels, four collections of stories, poetry, and texts for the stage, and he is an editor of the literary collective Nazione Indiana. He lives between Paris and Trento.About the Translator: Frederika Randall grew up in Pittsburgh and has lived in Italy for more than 30 years. A journalist and translator from Italian, she has written cultural reportage for numerous US and Italian publications. She translated the epic novel of the Risorgimento, Ippolito Nievo's Confessions of An Italian, fiction by Guido Morselli, Luigi Meneghello, Ottavio Cappellani, Helena Janeczek, Igiaba Scego and Davide Orecchio, and three volumes of nonfiction by historian Sergio Luzzatto. Awards include a Pen-Heim grant, and with Luzzatto, the Cundill Prize for Historical Literature. More at frederikarandall.wordpress.com.