The Vanishing American Dream: A Frank Look at the Economic Realities Facing Middle- and Lower-Income Americans 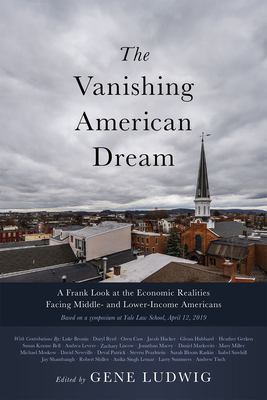 The Vanishing American Dream: A Frank Look at the Economic Realities Facing Middle- and Lower-Income Americans

Editor  Gene Ludwig
Paperback
$ 18.99
Out of Stock In Store (Available to Order)

As we remap our economy, we have an opportunity to rebuild the American Dream for the long-term.

The gap between low- and moderate-income Americans and their wealthier counterparts has become unconscionably wide. A post-pandemic economic recovery presents an opportunity to address this deeper, troubling challenge and to rectify the economic injustice that threatens so many Americans.

In 2019, founder and CEO of Promontory Financial Group Gene Ludwig gathered a bipartisan group of the nation’s foremost economic thinkers — academics and politicians, CEOs and former presidential advisors — to break with convention and candidly discuss that widening gap. The Vanishing American Dream: A Frank Look at the Economic Realities Facing Middle- and Lower-Income Americans comes from their insights.

The opportunity to rebuild our economy should inspire the most important conversations and ideas of our time. The dialogue captured in this book provides broad and experienced perspectives on inequality and policy shortcomings, along with examples of ideas that have successfully narrowed the wealth gap, from government investment to the role of the private sector.

Combining expertise with optimism, The Vanishing American Dream invites readers to take a seat at the table for a bracing look at the road back to widespread opportunity, security, and prosperity.

Gene Ludwig is the founder of the Promontory family of companies and Canapi LLC, the largest financial technology venture fund in the United States. He is the CEO of Promontory Financial Group, an IBM company, and chairman of Promontory MortgagePath, a technology-based, mortgage fulfillment and solutions company. He is the former vice chairman and senior control officer of Bankers Trust New York Corp, served as the United States comptroller of the currency from 1993 to 1998 under President Bill Clinton, and was a partner at Covington & Burling from 1981 to 1992. In 2019 he founded the Ludwig Institute for Shared Economic Prosperity, an organization dedicated to the economic well-being of middle- and lower-income Americans. His writing has appeared in The Financial Times, The New York Times, The Wall Street Journal, American Banker, and Time. He holds a master’s degree from Oxford University and is a New College Oxford fellow. He holds a J.D. from Yale University, where he was editor of the Yale Law Journal and chairman of Yale Legislative Services. Gene lives in Washington, DC, with his wife, Dr. Carol Ludwig. They have three children and two dogs who run the household.