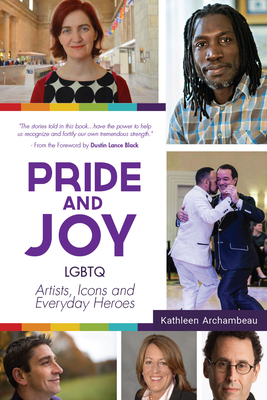 By  Kathleen Archambeau , Foreword by  Dustin Lance Black
$ 16.95
On Our Shelves Now

Stories of success, happiness and hope from the LGBT community

Stories that comprise the best of LGBT history: Pride and Joy: LGBTQ Artists, Icons and Everyday Heroestells the stories of queer citizens of the world living OUT and proud happy, fulfilling, successful lives. Diverse and global. Famous and unsung. There is a story here for everyone in the LGBT community who has ever questioned their sexual orientation or gender identity, or discovered it.

Discover LGBT community stories that will stir you and reveal:

Award-winning writer and longtime LGBTQ activist Kathleen Archambeau tells the untold stories from diverse LGBT community voices around the corner or around the world. Not like the depressing, sinister, shadowy stories of the past, this book highlights queer people living open, happy, fulfilling and successful lives.

Be inspired by LGBT community stories that celebrate the human spirit:

Pride & Joy is a window into the LGBTQ community for straight friends, allies, parents and families of this finally emerging marginalized group. There's hope that, in the words of Dan Savage, "It Gets Better" for: