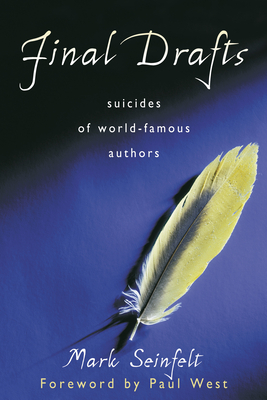 By  Mark Seinfelt
Paperback
$ 29.95
Pre-Order (Not Yet Published)

Some of the greatest writers in the history of the art-Hart Crane, Ernest Hemingway, Jerzy Kosinski, Sylvia Plath, Anne Sexton, and Virginia Woolf-all chose to silence themselves by suicide, leaving their families and friends with heartbreak and the world of literature with gaping holes. Their reasons for killing themselves, when known, were varied and, quite often, unreasonable. Some were plagued by depression or self-doubt, and others by frustration and helplessness in a world they could neither change nor tolerate. Profoundly moving and morbidly attractive, Final Drafts is a necessary historical record, biographical treatment, and psychological examination of the authors who left this "cruel world" by their own hands, either instantly or over long periods of relentless self-destructive behavior. It is also a devoted examination of references to suicide in literature, both by those who took their own lives and those who decided to live. Mark Seinfelt has selected many well-known (mostly fiction) writers, from those whose work dates to over a century ago-when the medical community was ill-equipped to deal with substance abuse and depression-to more recent writers such as Kosinski, Michael Dorris, and Eugene Izzi, who have left a puzzled literary community with a sad legacy. Seinfelt reveals that many authors contemplated ending their lives in their work; were obsessed with destroying themselves; were unable-in the case of the Holocaust-to live with the fact that their contemporaries had been killed; believed death to be a freedom from the horrors that forced them to create; and, sometimes, were simply unable to withstand rejection or criticism of their work. Other noted authors discussed in this volume include John Berryman, Ambrose Bierce, Harry Crosby, John Davidson, William Inge, Randall Jarrell, Arthur Koestler, T.E. Lawrence, Primo Levi, Jack London, Jay Anthony Lukas, Tom McHale, Yukio Mishima, Henry de Montherlant, Seth Morgan, George Sterling, Sara Teasdale, Ernst Toller, John Kennedy Toole, Sergey Yesenin, and many others.

Mark Seinfelt is a recipient of the prestigious Henry Sams Memorial Award from Pennsylvania State University, received of Master of Fine Arts degree in writing from Washington University, where he was also awarded a scholarship. He lives in Philipsburg, Pennsylvania.