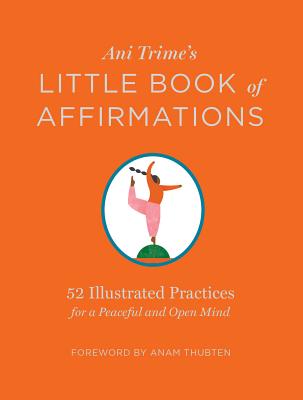 “Every thought I think is creating my future.” So begin the 52 affirmations of Ani Trime, a beloved teacher in the Tibetan Buddhist tradition who began her own life as a gruff, plainspoken West Virginian. Noted for her sense of humor and her no-nonsense style of spiritual practice, Trime believed that anyone could learn to loosen the grip of negative thoughts by cultivating more healing, helpful ways of thinking in the garden of the mind. This practical approach to fostering peace and positivity is at the heart of these accessible, enlightening, and uplifting affirmations — one for each week of the year — that will resonate with everyone. Collected in an appealing, pocket-size volume, Ani Trime’s Little Book of Affirmations features original illustrated interpretations of each affirmative expression from 39 well-known contemporary commercial artists.

Ani Trime Lhamo, fully ordained as a Buddhist nun in 1988, was a beloved meditation teacher in the Tibetan Buddhist tradition. She was spiritual director of the Princeton Buddhist Meditation Group for more than two decades. She also practiced, taught, and led retreats throughout the U.S. and Canada, including at the Omega Institute and Gampo Abbey, a Tibetan Buddhist monastery on Cape Breton Island, Nova Scotia, where she was a resident. A West Virginia native, she died in October 2016 at the age of 88, leaving behind thousands of students who cherished her clarity, sense of humor, and no-nonsense approach to spiritual practice in an everyday context.