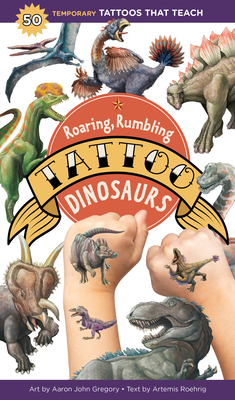 From the towering Tyrannosaurus to the winged Microraptor, Roaring, Rumbling Tattoo Dinosaurs features 50 detailed tattoos depicting dinosaurs as scientists think they might have looked, along with fascinating facts about each one. Easy to apply with a damp cloth, these tattoos promise tons of prehistoric fun — and learning — for kids with a passion for dinosaurs!

Artemis Roehrig is a children’s book coauthor and wrote the text for Super, Strong Tattoo Sharks, Roaring Rumbling Tattoo Dinosaurs, Creepy, Crawly Tattoo Bugs, and Fluttery, Friendly Tattoo Butterflies and Other Insects. She grew up in western Massachusetts and spent summers on Cape Cod where she worked at the Wellfleet Bay Wildlife Sanctuary. After graduating from Skidmore College, she received her master’s degree from the organismic & evolutionary biology program at the University of Massachusetts. She continues to research invasive insects in the Elkinton Lab.