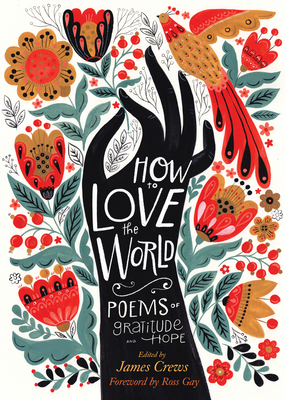 More and more people are turning to poetry as an antidote to divisiveness, negativity, anxiety, and the frenetic pace of life. How to Love the World: Poems of Gratitude and Hope offers readers uplifting, deeply felt, and relatable poems by well-known poets from all walks of life and all parts of the US, including inaugural poet Amanda Gorman, Joy Harjo, Naomi Shihab Nye, Ross Gay, Tracy K. Smith, and others. The work of these poets captures the beauty, pleasure, and connection readers hunger for. How to Love the World, which contains new works by Ted Kooser, Mark Nepo, and Jane Hirshfield, invites readers to use poetry as part of their daily gratitude practice to uncover the simple gifts of abundance and joy to be found everywhere. With pauses for stillness and invitations for writing and reflection throughout, as well as reading group questions and topics for discussion in the back, this book can be used to facilitate discussion in a classroom or in any group setting.

James Crews is the editor of the best-selling anthology, How to Love the World, which has been featured on NPR’s Morning Edition, in the Boston Globe, and the Washington Post, and is the author of four prize-winning collections of poetry: The Book of What Stays, Telling My Father, Bluebird, and Every Waking Moment. His poems have been reprinted in the New York Times Magazine, Ploughshares, The New Republic, and The Christian Century, and in former US poet laureate Ted Kooser’s weekly newspaper column, “American Life in Poetry,” and featured on Tracy K. Smith’s podcast, The Slowdown. He worked with Ted Kooser on “American Life in Poetry,” which reaches millions of readers across the world. Crews holds an MFA in creative writing from the University of Wisconsin–Madison and a PhD in writing and literature from the University of Nebraska–Lincoln. He teaches poetry at the University at Albany and lives with his husband in Shaftsbury, Vermont.

Ross Gay is the author of The Book of Delights, a genre-defying book of essays, and four books of poetry, including his most recent, Be Holding, is a love song to legendary basketball player Julius Erving—known as Dr. J—who dominated courts in the 1970s and ‘80s as a small forward for the Philadelphia ‘76ers. Gay is a founding editor, with Karissa Chen and Patrick Rosal, of the online sports magazine “Some Call it Ballin’.” A founding board member of the Bloomington Community Orchard, a non-profit, free-fruit-for-all food justice and joy project, Gay has received fellowships from Cave Canem, the Bread Loaf Writer’s Conference, and the Guggenheim Foundation. He teaches at Indiana University.