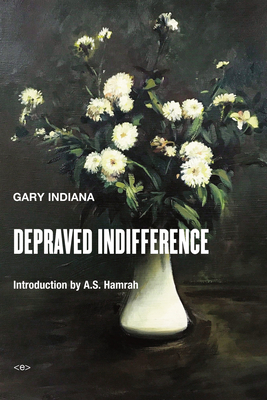 She collected future marks like lottery tickets. She operated by reflex. Any public room was a pristine harvest of human information. Not just business cards, phone numbers, fax numbers and the like, but weaknesses, quirks, character flaws, delusional ambitions, risky dreams, medical problems, shaky marriages. Everybody came equipped with a panel of invisible buttons.... If you had the right touch, if you knew how to press one button lightly and another button with a bit more force, you could make the emotional side of a person swing up and down as you wished.
—from Depraved Indifference

First published in 2001, Depraved Indifference is the third of Gary Indiana's famed crime trilogy now being reissued by Semiotext(e). Inspired by the virtuoso con artistry of mother-and-son criminals Sante and Kenneth Kimes, Depraved Indifference follows Evangeline Slote, a dead ringer for Elizabeth Taylor “so compulsive she grifts herself when she runs out of other people” through the circus of calamity that her compulsions invoke. Evangeline, or “Evelyn Carson, “Princess Shah Shah,” among other pseudonyms, accompanied by her alcoholic husband Warren and fanatically devoted son Devin, moves from Las Vegas to Hawaii to Nassau in a maelstrom of forgery and fraud that constantly threatens to come undone. When Warren dies, Evangeline and her son embark upon an ever more brazen series of grifts, frauds, and crimes. Thriving on chaos, a master of manipulation and seduction, Evangeline concocts the scheme to end all schemes—which may take a murder to complete.

Reminiscent of Nathanael West's The Day of the Locust, Indiana's scathing, insightful prose is a mirror to the empty landscape of American culture.

Gary Indiana is a novelist, playwright, critic, essayist, filmmaker, and artist. Hailed by the Guardian as “one of the most important chroniclers of the modern psyche,” and by the Observer as "one of the most woefully underappreciated writers of the last 30 years," he published a memoir, I Can Give You Anything But Love, in 2015. He is also the author of Three Month Fever: The Andrew Cunanan Story and Resentment: A Comedy (both published by Semiotex(e)).