Season of My Enemy (Heroines of WWII) 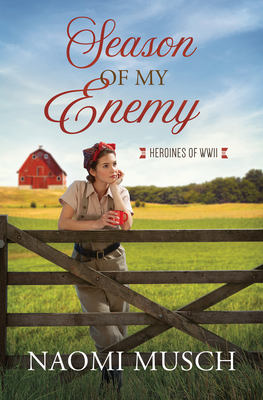 Season of My Enemy (Heroines of WWII)

Full of intrigue, adventure, and romance, this series celebrates the unsung heroes—the heroines of WWII.

Only last year, Fannie O’Brien was considered a beauty with a brain, and her future shone bright, despite the war pounding Europe. With her father’s sudden death and her brothers overseas, Fannie must now do the work of three men on their 200-acre farm—until eight German prisoners arrive and, just as Fannie feared, trouble comes too. Someone seems intent on causing “accidents,” and Fannie is certain the culprit is one of the two handsome older Germans—or possibly both. Can she manage the farm, keep the prisoners in line, and hold her family together through these turbulent times?

​Don’t miss these other stories:
The Cryptographer’s Dilemma by Johnnie Alexander
Picture of Hope by Liz Tolsma
Saving Mrs. Roosevelt by Candice Sue Patterson
Mrs. Witherspoon Goes to War by Mary Davis
A Rose for the Resistance by Angela K. Couch

Naomi Musch is an award-winning author who writes from a deer farm in the pristine north woods of Wisconsin, where she and husband Jeff live as epically as God allows near the families of their five adult children. When not in the physical act of writing or spending time loving on her passel of grandchildren, she can be found plotting stories as she roams around the farm, snacks out of the garden, and relaxes in her vintage camper. Naomi is a member of the American Christian Fiction Writers, the Wisconsin Writers' Association, and the Lake Superior Writers. She loves engaging with others and can be found all around social media or at her site naomimusch.com