Pompeii: A Captivating Guide to the City in Ancient Rome That Was Buried Because of the Eruption of Mount Vesuvius during the R 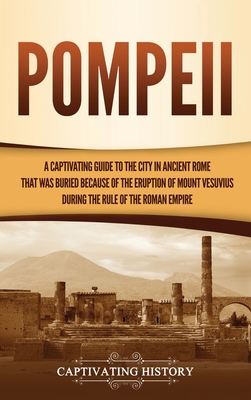 Pompeii: A Captivating Guide to the City in Ancient Rome That Was Buried Because of the Eruption of Mount Vesuvius during the R

By  Captivating History
$ 25.99
Out of Stock In Store (Click to Order)

Discover the mysteries and secrets of Pompeii, the city that disappeared in the fires of Mount Vesuvius and was buried for centuries.

Pompeii was destroyed by the horrific eruption of Mount Vesuvius in 79 CE, which buried at least two thousand unlucky people. Pompeii became a mysterious tomb, hiding secrets of Rome and other civilizations that influenced the life and culture of the city and its people. Who were the Pompeiians, and how did they live before that dreadful day? What did the last days of Pompeii look like, and did the Pompeiians know that the fate of their city would be sealed that day, not to be uncovered for centuries to come?

The first major excavations commenced in the 1700s and are still ongoing, as only a part of Pompeii's historical treasures have been recovered from the pumice and volcanic ash. Mount Vesuvius gave the city its life and powered the rise of many civilizations in Campania, but it took back what it had given eight centuries later. Today, Pompeii, a city essentially frozen in time, is visited by more than two million people annually.

Explore the unburied streets of Pompeii that were once teeming with life, and discover what made the beautiful city of Pompeii so important to the Roman Empire. In this book, you will also learn:

Click "Add to cart" to unlock the secrets of Pompeii and unveil the mysteries and hidden treasures that had once been concealed for centuries.