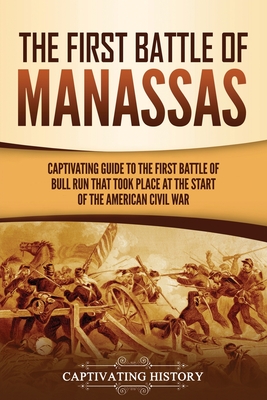 Discover the story of the first official battle of the American Civil War, the First Battle of Manassas, in this captivating book on what transpired on that fateful day of July 21st, 1861.

The causes of the American Civil War, which lasted from April 1861 to May 1865, were many and complex. At the heart of the disagreement, however, was slavery. The Southern states of the newly formed but illegal Confederacy were prepared to fight the US federal government to the death to retain their right to keep slaves for their plantations. The election of President Abraham Lincoln in late 1860, whose open intention was to abolish slavery, created a military upheaval south of Washington, DC, and civil war ensued. Although other attacks and skirmishes between the North and South occurred before the summer of 1861, it was the First Battle of Manassas (also known as the First Battle of Bull Run) on July 21st of that year that marked the first official engagement of the long war to come. Unfolding in northeastern Virginia, not far from the American capital, seventy thousand men met across the Bull Run River, equally divided between their loyalties to Washington and Richmond-the Confederacy's capital. The armies were the largest raised by America until that time, but most of the soldiers were "green" and untried. Both Northerners and Southerners alike had rushed into the engagement, both overconfident and underprepared. On that fateful day, men, who had until so recently been friends and allies, fought against one another to the bitter end because their leaders were not prepared to negotiate on their ideals. Although the South was victorious at the First Battle of Manassas, in truth, over the course of the four-year-long bloody and destructive Civil War, everyone became the loser. In this book, you will learn: Scroll up and click the "add to cart" button to learn more about the First Battle of Manassas