Against All Odds: The Atlanta Braves' Improbable Journey to the 2021 World Series 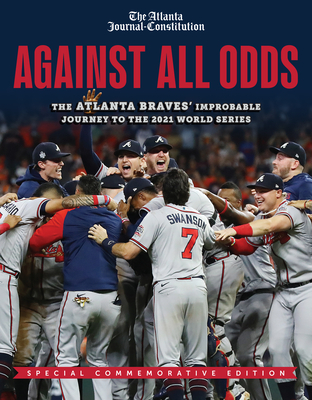 Against All Odds: The Atlanta Braves' Improbable Journey to the 2021 World Series

By  The Atlanta Journal-Constitution
$ 14.95
Out of Stock In Store (Available to Order)

The Atlanta Braves have been fixtures in the postseason in recent franchise history, with six playoff berths and four NL East titles in the last decade. The big breakthroughs had been fleeting prior to the 2021 season, however, with their last NL Pennant in 1999 and last World Series title in 1995.

That all changed in 2021 with a resilient and remarkable group taking down the powerful Houston Astros to claim the fourth World Series crown in franchise history and giving Braves fans a thrilling run they’ll never forget.   Packed with outstanding coverage and dynamic photography from The Atlanta Journal-Constitution, Against All Odds: The Atlanta Braves' Improbable Journey to the 2021 World Series guides fans through the Braves’ unbelievable journey – from battling through major injuries to the season-altering trade deadline acquisitions that sent them surging in the second half; from their dismantling of the Milwaukee Brewers in the NLDS and their overwhelming of the defending champion Los Angeles Dodgers in the NLCS, all the way through their resilient World Series triumph over the Houston Astros.

The Atlanta Journal-Constitution traces its roots to 1868, the founding date of The Atlanta Constitution. The Atlanta Journal debuted in 1883. The papers have been under common ownership since 1950 and fully merged in 2001. The newspaper is owned by Cox Enterprises, a family-owned company that has been in Atlanta since 1939.