Evolution Is Wrong: A Radical Approach to the Origin and Transformation of Life (Erich von Daniken Library) 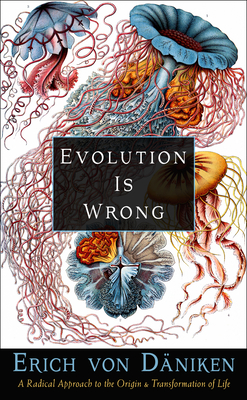 Evolution Is Wrong: A Radical Approach to the Origin and Transformation of Life (Erich von Daniken Library)

There was once a set of ideas called the theory of evolution, conceived by clever people and confirmed by countless scientists. Then people discovered the electron microscope. This made it possible to make the molecules within the cell visible, and suddenly questions about evolution arose that were not possible before. Which force actually bundles the atoms in the right order? What moves the molecular chains into the correct position? How did the first living unit within the cell actually come about? How does inheritance work, how does information pass on to the next generation? Did humans descend only and exclusively from primates—as Charles Darwin and countless other great minds assumed—or did additional “engines” intervene in evolution?

Today it is clear: countless questions can no longer be answered with the previous theory of evolution. There is a form of life called “Blob” (Physarum polycephalum). The “thing” has neither eyes nor ears, neither a mouth nor a nose or even a brain. Nevertheless, it takes in food, overcomes obstacles by the shortest route and exchanges information with other “blobs.” The “blob” contradicts any evolutionary thought that one develops from the other. Or the “gastric-brooding frogs” (Rheobatrachus) found in Australia. They hatch their young in the stomach. Impossible in a slow, evolutionary process.

Everywhere there are characteristics of animals that do not want to fit into the theory of evolution anywhere. And man? Are we really the most adapted life-form on this planet? Today, more and more scientists who contradict the previous theory of evolution speak out. The theory fits the changes within the species, but it can no longer be reconciled with the inner workings of the cell. Some other influence that has so far escaped us is affecting evolution. It is called “Intelligent Design.” Intelligent planning is suspected behind this. Anyone or anything—a spirit of the universe? Aliens?—could be behind this planning.

Erich von Däniken uses countless examples to demonstrate the impossibility of the previous evolutionary idea. He quotes scientists who argue against the previous teaching, but also those who defend it. Unfortunately, established science still refuses to look at discrepancies and holes in the theory of evolution, even though it is quite obvious that there is more going on with regard to the development of all species, as well as human culture, than could be explained by the theory of evolution alone.

Erich von Däniken is arguably the most widely read and most-copied nonfiction author in the world. He published his first (and best-known) book, Chariots of the Gods, in 1968. His research organization, the A.A.S.R.A./legendarytimes.com, comprises laymen and academics from all walks of life. He lives in Switzerland but is an ever-present figure on the international lecture circuit, traveling more than 100,000 miles a year.