Faucian Bargain: The Most Powerful and Dangerous Bureaucrat in American History 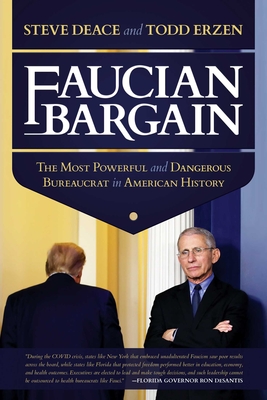 Faucian Bargain: The Most Powerful and Dangerous Bureaucrat in American History

As seen on Tucker Carlson Tonight
As heard on Glenn Beck

“In this important book the authors do the job our uninquisitive media has failed to do throughout this ordeal. Confirming with cited and sourced details the enemy of both liberty and logic the lockdowns have proven to be. Which also proves too much power in the hands of an unelected bureaucrat, regardless of his intentions, can no longer be our new normal.” —U.S. Senator Rand Paul (KY)

Can liberty survive in the hands of one all-powerful, unchallenged, and unelected bureaucrat?

It wasn’t too long ago that the average American didn’t know who Anthony Fauci was. Now, after the coronavirus has spread nationwide, he’s arguably the most powerful bureaucrat in American history. But is it dangerous for a free society to concentrate so much power in the hands of an unelected official? Who or what holds Fauci accountable?

Steve Deace is the author of numerous books, including the #1 bestseller Faucian Bargain: The Most Powerful and Dangerous Bureaucrat in American History, and A Nefarious Plot—which was also adapted into a major motion picture. He broadcasts each weekday on BlazeTV and lives in Iowa with his wife and kids.