The Heart of the Deal: A Novel 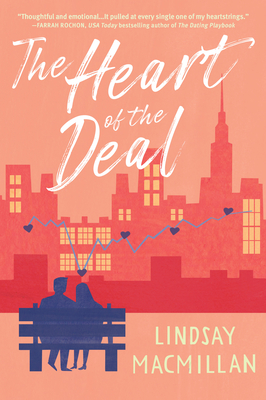 The Heart of the Deal: A Novel

Perfect for fans of The Happy Ever After Playlist and The Boyfriend Project, Lindsay MacMillan’s debut novel deftly captures the feeling of being adrift in your late twenties.

Rae is in a romantic recession.

The Wall Street banker is single in New York City and overwhelmed by the pressure to scramble up the corporate and romantic ladders. Feeling her biological clock ticking, she analyzes her love life like a business deal and vows to lock in a husband before her 30th birthday.

The Manhattan dating app scene has as many ups and downs as the stock market, and outsourcing dates to an algorithm isn’t exactly Rae’s idea of romance. She considers cutting her losses, but her friends help her stay invested, boosting her spirits with ice cream and cheap wine that they share in their sixth-floor walk-up while recapping cringe-worthy dates.

And then Rae meets Dustin, a poetic soul trapped in a business suit, just like her. She starts to hear wedding bells, but Dustin’s story is a complicated one, and no amount of financial modeling can project what their future will look like.

Can Rae free herself from the idea she had of what thirty was supposed to look like and let love breathe on its own timeline? Or is she too conditioned to stay on the “right track” to follow her unpaved intuition?

Moving, funny, and timely, The Heart of the Deal is the story of one woman’s reckoning with what success really is in a city, an industry, and a relationship whose low lows continually challenge the enchantment of the high highs.