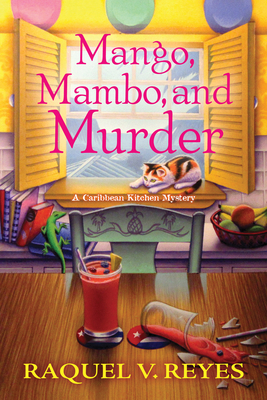 Food anthropologist Miriam Quiñones-Smith's move from New York to Coral Shores, Miami, puts her academic career on hold to stay at home with her young son. Adding to her funk is an opinionated mother-in-law and a husband rekindling a friendship with his ex. Gracias to her best friend, Alma, she gets a short-term job as a Caribbean cooking expert on a Spanish-language morning TV show. But when the newly minted star attends a Women's Club luncheon, a socialite sitting at her table suddenly falls face-first into the chicken salad, never to nibble again.

When a second woman dies soon after, suspicions coalesce around a controversial Cuban herbalist, Dr. Fuentes--especially after the morning show's host collapses while interviewing him. Detective Pullman is not happy to find Miriam at every turn. After he catches her breaking into the doctor's apothecary, he enlists her help as eyes and ears to the places he can't access, namely the Spanish-speaking community and the tawny Coral Shores social scene.

As the ingredients to the deadly scheme begin blending together, Miriam is on the verge of learning how and why the women died. But her snooping may turn out to be a recipe for her own murder.

Raquel V. Reyes writes Latina protagonists. Her Cuban-American heritage, Miami, and Spanglish feature prominently in her work. Mango, Mambo, and Murder, the first in the Caribbean Kitchen Mystery series, won a LEFTY for Best Humorous Mystery and was nominated for an Agatha award. The New York Times Book Review wrote, “it executes its mission—with panache.” Raquel’s short stories appear in various anthologies, including The Best American Mystery and Suspense 2022. Find her across social media platforms as @LatinaSleuths and on her website LatinaSleuths.com