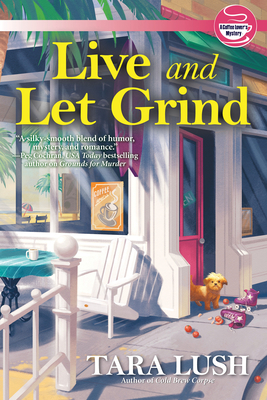 Devil’s Beach is percolating with a hot murder case, and reporter-turned-barista Lana Lewis could be the next to get beaned in Tara Lush’s third Coffee Lover’s mystery, perfect for fans of Cleo Coyle and Lucy Burdette.

Laid-off journalist Lana Lewis is thriving as the proprietor of Perkatory, a coffee shop on quirky Devil’s Beach island, Florida. She’s juggling a relationship with police chief Noah Garcia, enjoying the company of her best friend, Erica, and relishing the companionship of her golden Shih Tzu, Stanley. Only problem is her neighbor, Gus, who incessantly uses his leaf blower, disturbing everyone in the neighborhood. Lana has learned to tune it out, but Erica’s rage boils over and she confronts Gus.

Then Gus is found dead, killed when his leaf blower explodes. Erica immediately becomes suspect number one. But there are plenty of other candidates as well: Gus’s soon-to-be ex-wife, Honey Bailey, who thinks she’ll be written out of his will; Mickey Dotson and Doug Beck, who were scalded financially after purchasing a pirate-themed tourist cruise business from Gus; and plenty of angry neighbors who’ve had run-ins with him.

As the clock ticks down will Lana get someone to spill the beans on the killer so she can clear her friend’s name, or will Erica go to jail for a crime she didn’t commit?

Tara Lush is a Rita Award finalist, an Amtrak writing fellow, and a George C. Polk Award winning journalist. For the past decade, she's been a reporter with the Associated Press, covering crime, alligators, natural disasters, and politics. She also writes contemporary romance set in tropical locations. A fan of vintage pulp-fiction book covers, Sinatra-era jazz, and 1980s fashion, she lives with her husband and two dogs on the Gulf coast.