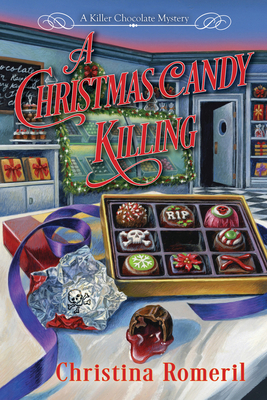 Their chocolates are to die for—but things aren’t so sweet when a real killer comes to town, in this debut mystery perfect for fans of Joanne Fluke and Laura Childs.

Identical twin sisters Alex and Hannah are the owners of Murder and Mayhem, a mystery bookshop that sells their famous poison-themed Killer Chocolates. But now, there’s a real killer in their midst. Shortly before Christmas, their septuagenarian neighbor, Jane, confides to Alex that a murderer from a true-crime show has taken up residence in the village. Unfortunately, she’s also shared her suspicions with town gossip Netta. The next morning, Alex shows up at Jane’s house to watch the show, but instead discovers Jane's body, with a box of Killer Chocolates nearby.

The sheriff quickly zeroes in on two suspects: Alex, a beneficiary in Jane’s will, and Zack, a handyman who was seen leaving the crime scene. But Alex maintains her innocence and sets out to draft a list of other potential suspects—townsfolk who’d recently been seen arguing with Jane.

When Alex gets hold of Jane’s journal, she begins to understand the truth. But a bearer of ill tidings is arriving early this year—and Alex just might not make it to Christmas.

Christina Romeril grew up in Kitchener, Ontario and has been devouring stacks of books since third grade when the Trixie Belden series sparked her love of the genre. She has lived on both coasts of Canada as a member of the Canadian military and later as a military spouse. As an Alberta transplant she is fascinated by mountains and loves to spend time with her husband at Waterton Lakes National Park in the Rocky Mountains. When she’s not enjoying nature, she loves to create and consume chocolate confections. Not necessarily in that order.