Enslaved: The Sunken History of the Transatlantic Slave Trade 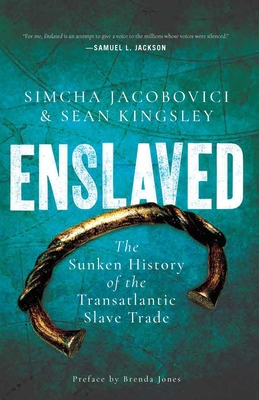 Enslaved: The Sunken History of the Transatlantic Slave Trade

A riveting and illuminating exploration of the transatlantic slave trade by an intrepid team of divers seeking to reclaim the stories of their ancestors.

“For me, Enslaved is an attempt to give a voice to the millions whose voices were silenced.”—Samuel L. Jackson, human rights activist and Hollywood icon

From the writers behind the acclaimed documentary series Enslaved (starring Samuel L. Jackson), comes a rich and revealing narrative of the true global and human scope of the transatlantic slave trade. The trade existed for 400 years, during which 12 million people were trafficked, and 2 million would die en route.

In these pages we meet the remarkable group, Diving with a Purpose (DWP), as they dive sunken slave ships all around the world. They search for remains and artifacts testifying to the millions of kidnapped Africans that were transported to Europe, the Americas, and the Caribbean. From manilla bracelets to shackles, cargo, and other possessions, the finds from these wrecks bring the stories of lost lives back to the surface.

As we follow the men and women of DWP across eleven countries, Jacobovici and Kingsley’s rich research puts the archaeology and history of these wrecks that lost between 1670 to 1858 in vivid context. From the ports of Gold Coast Africa, to the corporate hubs of trading companies of England, Portugal and the Netherlands, and the final destinations in the New World, Jacobovici and Kingsley show how the slave trade touched every nation and every society on earth.

Though global in scope, Enslaved makes history personal as we experience the divers’ sadness, anger, reverence, and awe as they hold tangible pieces of their ancestors’ world in their hands. What those people suffered on board those ships can never be forgiven. Enslaved works to ensure that it will always be remembered and understood, and is the first book to tell the story of the transatlantic slave trade from the bottom of the sea.

Dr. Sean Kingsley is a marine archaeologist who has explored over 350 wrecks from Israel to America. Off the UK he identified the world’s earliest Royal African Company English ‘slaver’ ship. Sean writes for National Geographic and is the founder of Wreckwatch magazine about the world’s sunken wonders.

Simcha Jacobovici is a three-time Emmy winning Israeli/Canadian filmmaker, New York Times bestselling author and an internationally acclaimed journalist. He is also an adjunct professor in the Department of Religion at Huntington University, Ontario, Canada. Jacobovici was Showrunner/Director of the 6-part series Enslaved: The Lost History of the Transatlantic Slave Trade for which he has received numerous awards including two NAACP Image Award nominations. Enslaved is his fourth book.  He divides his time between Toronto and Israel.

Brenda Jones is an award-winning political communicator, speechwriter and author who worked in the U.S. House of Representatives in Washington, DC for nearly 16 years.  She was the primary speechwriter and lead communications strategist for the late Rep. John Lewis. Brenda is the author of a four-book series on American political women called Queens of the Resistance. She collaborated with Rep. John Lewis on the New York Times bestseller, Across That Bridge:  Life Lessons and a Vision for Change, for which she won an NAACP Image Award. In 2022, Brenda joined the White House as Senior Presidential Speechwriter in the Executive Office of the President of the United States.