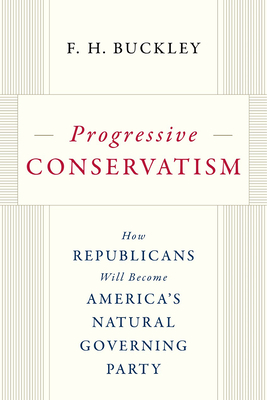 After the Democratic Party divided Americans along gender and racial lines, F.H. Buckley argues that the Republican Party can become the natural governing party again by uniting Americans around a return to their roots--championing the common good, liberty, and equality.

"Frank Buckley shakes conservatives by their lapels in this sharp-edged vision for a Republican Party. Progressivism Conservatism does what's needed--disrupt received wisdom with pragmatic, innovative ideas." --Philip K. Howard, author of The Death of Common Sense

"F. H. Buckley shows us how a seeming contradiction can lead to the healing of a fractured country." --Roger L. Simon, award-winning novelist and editor, Epoch Times

The Republican Party must return to its roots as a progressive conservative party that defends the American Dream, the idea that whoever you are, you can get ahead and know that your children will have it better than you did. It must show how the Democrats have become the party of inequality and immobility and that they created what structural racism exists through their unjust education, immigration, and job-killing policies.

Republicans must seek to drain the swamp by limiting the clout of lobbyists and interest groups. They must also be nationalists, and as American nationalism is defined by the liberal nationalism of our founders, the party must reject the illiberalism of extremists on the Left and Right. As progressives, Republicans must also recognize nationalism's leftward gravitational force and the way in which it demands that the party serve the common good through policies that protect the less fortunate among our countrymen.

At a time when the Left asks us to scorn our country, Republicans must also be the conservative party that defends our families, the nobility of American ideals, and the founders' republican virtues.

By championing these policies, the Republicans will retain the new voters Trump brought to the GOP as well as those who left the party because of him. And as progressive conservatives, the GOP will become America's natural governing party.