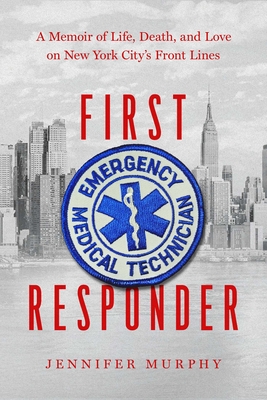 One woman's incredible story of life on the front lines as an emergency medical worker in New York City.

On the streets of New York City, EMTs and paramedics do more than respond to emergencies; they eat and drink together, look out for each other’s safety, mercilessly make fun of one another, date one other, and, most crucially, share terrifying experiences and grave injustices suffered under the city’s long-broken EMS system.

Their loyalty to one another is fierce and absolute. As Jennifer Murphy shows in the gripping and moving First Responder, they are a family. A dysfunctional family, perhaps, but what family isn't?

Many in the field of pre-hospital emergency care have endured medical trauma and familial hardship themselves. Some are looking to give back. Some are desperate for family. Some were inspired by 9/11. Still others want to become doctors, nurses, firefighters, cops, and want to cut their teeth on the streets. As rescuers, they never want people to die or get hurt. But if they are going to die or get hurt, first responders want to be there.

Despite the vital role they play New York City, EMTs are paid less than trash collectors, and far less than any other first responder makes, even though the burden of medical emergencies fall on the backs of EMTs and medics. Yet for Jennifer and her brothers and sisters, it's a calling more than a job. First responders are constantly exposed to infectious diseases, violence, and death. The coronavirus pandemic did not change that math; the public is just more aware of it.

After 9/11, EMT training schools experienced a surge in applications from civilians wanting to become first responders, inspired by rescuers who responded to the terrorist attacks and rushed into the burning towers when everyone else ran out. The same will almost certainly be true post-coronavirus as people are moved by a desire to help in times of crisis in a more direct way.

Funny and heartwarming, inspiring and poignant, First Responder follows Jennifer's journey to becoming an EMT and working during and beyond the Covid-19 pandemic. She will bring readers inside an intense world filled with crisis, rescue, grief, uncertainty, and dark humor. First Responder will move readers to a greater understanding and appreciation of those fighting for them—wherever they live—in a world they hardly know or could imagine.

Jennifer Murphy's writing has appeared in numerous literary journals and anthologies, including Mississippi Review and Wrath-Bearing Tree as well as Forbes, and the New York Post. In addition to her EMT work, she maintains a parallel career as an investigator and crisis adviser. She graduated with a B.A. from Syracuse University and an M.A. from the University of Chicago and an M.F.A. from New York University. She is a volunteer EMT with the Park Slope Volunteer Ambulance Corps in Brooklyn that transports patients regardless of their ability, or inability, to pay.