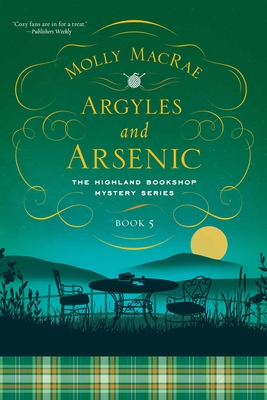 In the latest novel in the beloved Highland Bookshop Mystery Series, a murder at a baronial manor leads to a poisonous game of cat and mouse—with the women of Yon Bonnie Books playing to win.

After 93 well-lived years, Violet MacAskill is ready to simplify her life. Her eccentric solution? She’ll throw a decanting and decluttering party at her family home—a Scottish Baronial manor near the seaside town of Inversgail, Scotland. Violet sets aside everything she wants or needs, then she invites her many friends in to sip sherry and help themselves to whatever they want from all that’s left.

Janet Marsh and Christine Robertson, two of the women who own Yon Bonnie Books in Inversgail, enjoy themselves at the party. Not everyone who attends has a good time, though. Wendy Erskine, director of the Inversgail museum, is found dead, and rumors swirl about food poisoning from a local food truck. Then Violet tells Constable Hobbs that a tin of rat poison is missing. And when Hobbs’ own grandmother comes under suspicion for murder, he enlists the women from Yon Bonnie Books, and the race is on to find the murderer.

But where do they begin? Are there clues in the “Shocking Stockings” exhibit at the museum? Will the antique scrapbook pasted full of trivia about arsenic and bygone poisoners offer a solution? Or does the answer lie closer to home—is one of Violet’s friends truly toxic? Poisonous games are afoot in Inversgail and the women of Yon Bonnie Books are playing to win.

Molly MacRae is the national bestselling author of Plaid and Plagiarism, Scones and Scoundrels, Thistles and Thieves, and Heather and Homicide, all available from Pegasus Crime. Her short stories have appeared in Alfred Hitchcock Mystery Magazine for more than twenty years, and she has won the Sherwood Anderson Award for Short Fiction. Molly lives with her family in Champaign, Illinois.