The Oregon Trail Romance Collection: 9 Stories of Life on the Trail into the Western Frontier 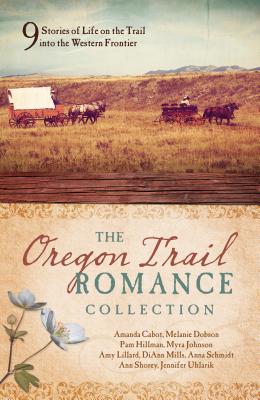 The Oregon Trail Romance Collection: 9 Stories of Life on the Trail into the Western Frontier

Nine romantic adventures take readers along for a ride on the Oregon Trail where daily challenges force travelers to evaluate the things that are most precious to them—including love. Enjoy the trip through a fascinating part of history through the eyes of remarkably strong characters who stop at famous landmarks along the way. Watch as their faith is strengthened and as love is born despite unique circumstances. Discover where the journey ends for each of nine couples.

The Sagebrush Bride by Amanda Cabot
1852 – Avice Longcope’s parents have died on the trail, her uncle has confiscated all they owned, and now he wants her to marry his new business partner. When the wagon train reaches Fort Laramie, Avice is desperate to escape her uncle’s plans, but she doesn’t expect a sudden proposal from the widowed sutler.

Beckoned Hearts by Melanie Dobson
1856 – Widowed, Molly Goodwin has spent the winter in Idaho’s Fort Hall, working for a shopkeeper. When Payton Keller brings his sick sister to her, she is glad to help and for female companionship. But when the siblings invite her to go with them to Oregon, can Molly accept when her plans were to return East?

Shanghaied by the Bride by Pam Hillman
1851 – Blake Samuelson wakes up in the bed of a wagon lumbering west along the Oregon Trail. He remembers being attacked, but not how he got in the wagon. Cassidy Taylor sees Blake as an answer to prayer for a man to help her all female family on the trail.

Settled Hearts by Myra Johnson
1852 - Desperate to find her father in Oregon for her ill mother, Emma Clarke teams up with John Patrick, a loyal uncle who is determined to hide his niece and nephew from abusive adoptive parents. Will Emma and John find the hope they seek for their futures along the trail?

As Good as Gold by Amy Lillard
1851 – Ellis Hardy is headed to the gold mines of California when he takes up Trudy Johnson’s proposition: pretend to be her husband and protect her and her daughter as they travel to meet up with her real husband in Oregon. Sounds easy enough, but Trudy is hiding something important.

Daughter of the Wind by Diann Mills
1851 – While Lane Walker is out scouting for a wagon train, a tornado destroys the wagons and kills everyone—except Deborah and seven little girls who had joined her on a hike to a rocky bluff. How is this little band of survivors to get through the wilderness without provisions?

His Frontier Family by Anna Schmidt
1851 – Captain Jason Campbell is not the marrying kind. So when yet another wagon train pulls into the fort he is unprepared for his attraction to the beautiful young widow, Emma Carson who comes to him for helping in finding her twelve-year-old son.

State of Matrimony by Ann Shorey
1858 – Diantha Bowers joins a family moving to Oregon, but when the husband dies, the wife wants to return East. Will Diantha lose her dreams of adventure, or will one of the two men vying for her affections convince her to stay the course?

Sioux Summer by Jennifer Uhlarik
1854 – Ellie Jefford is struggling after the death of her husband and son. Alone to serve Indians and immigrants at a trading post during her cantankerous father-in-law’s illness, she welcomes a friendly face in Teagan Donovan, who declares he is on his last trip as a trail guide before settling down on his own farm.

Amanda Cabot’s dream of selling a book before her thirtieth birthday came true, and she’s now the author of more than thirty-five novels. Her romances have appeared on the CBA and ECPA bestseller lists, have garnered a starred review from Publishers Weekly, and have been finalists for the ACFW Carol, the HOLT Medallion, and the Booksellers Best awards.
A popular speaker, Amanda is a member of ACFW and a charter member of Romance Writers of America. A Christmastime bride, she married her high school sweetheart who shares her love of travel and who’s driven thousands of miles to help her research her books. After years as Easterners, they fulfilled a longtime dream when Amanda retired from her job as Director of Information Technology for a major corporation and now live in Cheyenne.
You can find her at www.amandacabot.com.


Three-time Carol Award winner and bestselling author of fifteen novels, Melanie Dobson is the former corporate publicity manager at Focus on the Family and owner of Dobson Media Group. Because of her husband’s work in the film industry, their family has lived in multiple states as well as Germany, but the Dobson family is settled for now in a small town near Portland, Oregon. Melanie loves connecting with readers via her website at www.melaniedobson.com.

CBA Bestselling author Pam Hillman was born and raised on a dairy farm in Mississippi and spent her teenage years perched on the seat of a tractor raking hay. In those days, her daddy couldn't afford two cab tractors with air conditioning and a radio, so Pam drove an Allis Chalmers 110. Even when her daddy asked her if she wanted to bale hay, she told him she didn't mind raking. Raking hay doesn't take much thought so Pam spent her time working on her tan and making up stories in her head. Now, that's the kind of life every girl should dream of. www.pamhillman.com


Although currently residing in North Carolina, Myra Johnson proudly claims her heritage as a native Texan, and she sorely misses real Texas barbecue! Myra is a two-time ACFW Carol Award finalist, winner of the 2005 RWA Golden Heart, and winner of the 2014 Christian Retailing’s Best Award for historical fiction. Married since 1972, Myra and her husband have two bright, beautiful daughters, two mission-minded sons-in-law, and seven amazing grandchildren. The Johnsons share their home with a couple of very pampered rescue dogs.

Amy Lillard loves nothing more than a good book. Except for her family. . .and maybe homemade tacos. . .and nail polish. But reading and writing are definitely high on the list. Born and bred in Mississippi, Amy is a transplanted Southern Belle who now lives in Oklahoma with her deputy husband, their genius son, three spoiled cats, and one very lazy beagle. When she’s not creating quirky characters and happy endings, she’s chauffeuring her prodigy to guitar lessons, orchestra concerts, and baseball practice. She has a variety of hobbies, but her favorite is whatever gets her out of housework. An award-winning author, Amy is a member of RWA and ACFW. She loves to hear from readers. You can find her on Facebook, Instagram, Google+, Twitter, Goodreads, and Pinterest. For links to the various sites, check her website: www.amylillardbooks.com.


DiAnn Mills is a bestselling author who believes her readers should expect an adventure. She creates action-packed, suspense-filled novels to thrill readers. Her titles have appeared on the CBA and ECPA bestseller lists; won two Christy Awards; and been finalists for the RITA, Daphne Du Maurier, Inspirational Readers’ Choice, and Carol award contests. She is the director of the Blue Ridge Mountain Christian Writers Conference, Mountainside Marketing Retreat, and Mountainside Novelist Retreat with social media specialist Edie Melson. Connect with DiAnn here: DiAnnMills.com.

Anna Schmidt is the author of over twenty works of fiction. Among her many honors, Anna is the recipient of Romantic Times’ Reviewer’s Choice Award and a finalist for the RITA award for romantic fiction. She enjoys gardening and collecting seashells at her winter home in Florida.

Ann Shorey has been a full-time writer for over twenty years. She made her fiction debut with The Edge of Light, Book One in the At Home in Beldon Grove series. Her latest releases include Love’s Sweet Beginning, the third book in the Sisters at Heart series, and several novellas. Ann and her husband make their home in southwestern Oregon.

Jennifer Uhlarik discovered the western genre as a preteen, when she swiped the only “horse” book she found on her older brother’s bookshelf. A new love was born. Across the next ten years, she devoured Louis L’Amour westerns and fell in love with the genre. In college at the University of Tampa, she began penning her own story of the Old West. Armed with a BA in writing, she has won five writing competitions and was a finalist in two others. In addition to writing, she has held jobs as a private business owner, a schoolteacher, a marketing director, and her favorite—a full-time homemaker. Jennifer is active in American Christian Fiction Writers and is a lifetime member of the Florida Writers Association. She lives near Tampa, Florida, with her husband, teenage son, and four fur children.