Pump: A Natural History of the Heart 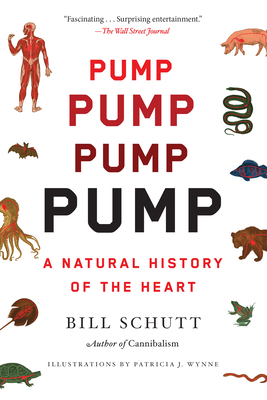 Pump: A Natural History of the Heart

By  Bill Schutt
Paperback
$ 17.99
Likely On Our Shelves

In this lively, unexpected look at the hearts of animals—from fish to bats to humans—American Museum of Natural History zoologist Bill Schutt tells an incredible story of evolution and scientific progress. We join Schutt on a tour from the origins of circulation, still evident in microorganisms today, to the tiny hardworking pumps of worms and the golf-cart-sized hearts of blue whales. We visit beaches where horseshoe crabs are being harvested for their blood, which has properties that can protect humans from deadly illnesses. We learn that when temperatures plummet, some frog hearts can freeze solid for weeks, resuming their beat only after a spring thaw. And we journey with Schutt through human history, too, as he traces humanity’s cardiac fascination from the ancient Greeks and Egyptians, who believed the heart contained the soul, all the way up to modern-day laboratories, where scientists use animal hearts and even plants as the basis for many of today’s cutting-edge therapies. Pump shows us this mysterious organ in a completely new light.

Bill Schutt is a vertebrate zoologist and author of six nonfiction and fiction books, including Pump: A Natural History of the Heart and the New York Times Editor’s Choice, Cannibalism: A Perfectly Natural History. Recently retired from his post as professor of biology at LIU Post, he is a research associate at the American Museum of Natural History, where he has studied bats all over the world. His research has been featured in Natural History magazine as well as in the New York Times, Newsday, the Economist, and Discover.