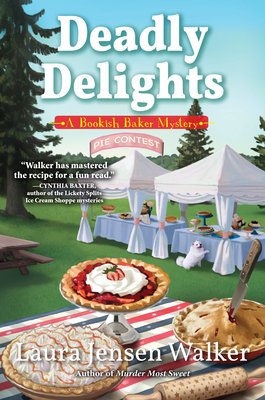 By  Laura Jensen Walker
$ 26.99
Out of Stock In Store (Available to Order)

In Laura Jensen Walker's second Bookish Baker mystery, Teddie St. John enters a pie-baking contest. But her chances of winning plummet when she's suspected of killing one of the judges!

August in Lake Potawatomi, Wisconsin, always means one thing: the annual baking contest. Picture The Great British Baking Show, writ Midwestern. It's a huge draw for the upper crust of Wisconsin pastry aficionados. And, of course, bon vivant baker-turned-mystery writer Teddie St. John has a pie in the ring. The white vinyl baking tent boasts an array of folding tables housing each entrant's daily baked good. And at one of those tables sits the corpse of the head judge, his face half-buried in a delectable coconut cream pie.

The body in question belonged to notorious Les Morris. Les may have been getting on in years, but he hadn't outgrown his well-earned reputation for lechery. Now, Les is no more. But unfortunately, by his side lies Teddie's distinctive embossed rolling pin...covered with blood.

It's out of the baking pan, into the oven. A life sentence behind a lattice of prison bars and a tangle of rhu-barbed wire will never do, and Teddie's quick wit and bohemian charm won't save her from the long spatula of the law. So, with the help of her friends, she'll concoct a recipe to clear her name--if the real killer doesn't ice her first.

Laura Jensen Walker has loved mysteries ever since she read Trixie Belden in the fourth grade in her Danish-founded hometown of Racine, Wisconsin--America's kringle capital (which Laura also loves). A former journalist and the author of several books, including cozy mysteries Murder Most Sweet and Hope, Faith, & a Corpse. Laura lives in California with her Renaissance-man husband and their canine-daughter Mellie, the alpha female in the house.