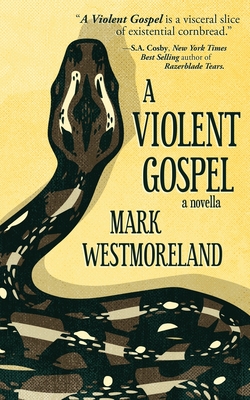 If there's a bad idea in Tugalo County, chances are that Mack and Marshall Dooley are behind it. When the brothers heist a snake-handling church's money-laundering operation, things go south in a hurry.

This part of the north Georgia hills ain't much, just hardscrabble folks trying to get by. It's the perfect place to wash a load of cash -- and an even better place to make your enemies disappear. When Mack goes missing, Marshall cuts a deal with a local crime boss to rescue his brother. Navigating a storm of wild women and a literal nest of vipers, the Dooleys can't trust anyone other than themselves to get out of the mess they've made. Praise for A VIOLENT GOSPEL: "Let me be the first to sing A Violent Gospel's praises. Mark Westmoreland's debut is the literary equivalent of The Dukes of Hazzard driving onto the set of Elmore Leonard's Justified. This book is filled with folks who know right from wrong but don't like boring." -David Tromblay, author of As You Were and Sangre Road "Mark Westmoreland's A Violent Gospel is a down-n-dirty, rough-n-tumble romp where no punches are pulled, and Old Testament justice is the law of the land." -Steph Post, author of Lightwood and Miraculum "In A Violent Gospel Mark Westmoreland stakes his claim as a powerful voice in the Neo-Southern Gothic Movement. Equal parts Flannery O'Connor, Harry Crews with a smidge of Gator era Burt Reynolds, A Violent Gospel is a visceral slice of existential cornbread." -S.A. Cosby, author of Razorblade Tears and Blacktop Wasteland "This book is rural crime fiction at its best. A bullet read that gets right down to the dark and dirty point. Westmoreland's ability to play in the gray area between darkness and light is spot on word candy that is perfectly suited to the title of A Violent Gospel. Look out for this guy. He's going to listed with Daniel Woodrell and Tom Franklin in no time." -Brian Panowich, author of Hard Cash Valley and Bull Mountain "A Violent Gospel is one rollicking old testament ass whoopin' of a debut. Westmoreland is an exciting new voice in southern noir, delivering 100 Proof Hellbilly Pulp and I can't wait for more." -Peter Farris, author of Last Call for the Living and Clay Eaters