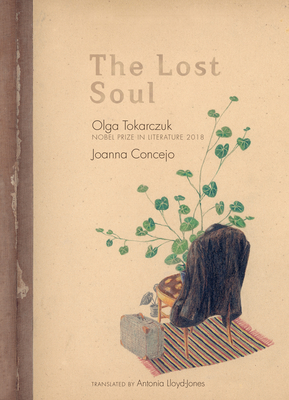 By  Olga Tokarczuk , Illustrated By  Joanna Concejo , Translated by  Antonia Lloyd-Jones
Hardcover
$ 22.95
Likely On Our Shelves

The only book in English for readers of all ages by Nobel Prize-winning novelist Olga Tokarczuk is a beautifully illustrated meditation on the fullness of life.

"Olga Tokarczuk’s The Lost Soul, an experimental fable illustrated by Joanna Concejo and translated by Antonia Lloyd-Jones, resonates with our current moment. . . . What a striking, and lovely, material object it is." —New York Times

"The Lost Soul, by Olga Tokarczuk and illustrator Joanna Concejo, is a quiet meditation on happiness, following a busy man who loses his soul. . . It pours a childlike sense of wonder into a once-upon-a-time tale that is already resonating with adults around the world." —The Guardian

The Lost Soul is a deeply moving reflection on our capacity to live in peace with ourselves, to remain patient, attentive to the world. It is a story that beautifully weaves together the voice of the Nobel Prize-winning Polish novelist Olga Tokarczuk and the finely detailed pen-and-ink drawings of illustrator Joanna Concejo, who together create a parallel narrative universe full of secrets, evocative of another time. Here a man has forgotten what makes his heart feel full. He moves to a house away from all that is familiar to him to wait for his soul to return.

"Once upon a time there was a man who worked very hard and very quickly, and who had left his soul far behind him long ago. In fact his life was all right without his soul—he slept, ate, worked, drove a car and even played tennis. But sometimes he felt as if the world around him were flat, as if he were moving across a smooth page in a math book that was covered in evenly spaced squares... " —from The Lost Soul

The Lost Soul is a sublime album, a rare delicacy that will delight readers young and old.

"You must find a place of your own, sit there quietly and wait for your soul."

Olga Tokarczuk (1962-) is an activist, public intellectual, and one of Poland's most highly regarded writers. She is winner of the 2018 Nobel Prize in Literature (given in 2019). In 2018 she won The International Man Booker Award for her novel, Flights (translated by Jennifer Croft), and twice (2009, 2015) won Poland's highest literary honor, the Nike (and the Nike Readers' Prize) as well as other prestigious literary awards. Her 2009 novel Drive Your Plow Over the Bones of the Dead (translated into English by Antonia Lloyd-Jones), was shortlisted for the 2019 Man Booker International Prize. Tokarczuk is the author of eight novels and two short story collections. The Lost Soul, the first book by Tokarczuk written for both children and adults was awarded a special mention of the Bologna Ragazzi Award in 2018. Tokarczuk's work has been translated into a dozen languages. She lives in Wroclaw, Poland.

Illustrator Joanna Concejo (1971-) graduated from the Academy of Fine Arts in Poznan, Poland. Her work has been exhibited in salons and exhibitions France, South Korea, Portugal, and the Bologna Children's International Book Fair where her work won a Bologna Ragazzi Award Mention, and many other places. She is author and illustrator of books published in Poland, France, Italy, Switzerland, Spain, and South Korea. In 2013 she was Winner of the IBBY Book of Year for graphic design (for Ksiaze w cukierni / Prince in a pastry shop, Format Editions), and in 2018 received a Mention/Fiction (for Zgubiona dusza / The Lost Soul). She lives outside of Paris, France. Translator Antonia Lloyd-Jones has translated works by several of Poland's leading contemporary novelists and reportage authors, as well as crime fiction, poetry, and children's books. Her translation of Drive Your Plow Over the Bones of the Dead by 2018 Nobel Prize laureate Olga Tokarczuk was shortlisted for the 2019 Man Booker International Prize. She is a mentor for the Emerging Translators' Mentorship Programme, and former co-chair of the UK Translators Association.