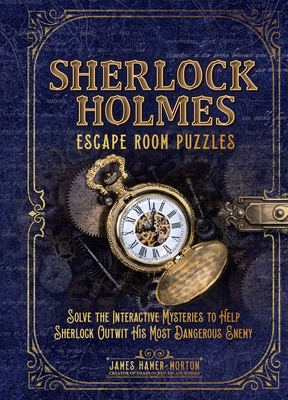 By  James Hamer-Morton
Paperback
$ 12.99
Likely On Our Shelves

Can you help Dr. Watson find his missing friend Sherlock Holmes? Follow the trail of clues in a series of interconnected logic puzzles to solve the mystery!

Sherlock Holmes is missing, and he’s left a fiendishly puzzling trail of clues to his whereabouts. In Sherlock Holmes Escape Room Puzzles, you’ll take on the role of Sherlock’s trusted friend Dr. Watson and attempt to solve 10 interconnected puzzles to sort out the mystery. Each of the story-driven puzzles requires that you use logical reasoning, mathematics, and observation skills to find the solution. The puzzle pages in the book can also be downloaded using an included QR code if you want to share the fun with your friends. If you’re stumped, clues of three levels of difficulty will give you a push in the right direction. Button up your coat and don your sleuthing hat—for the game is afoot!

James Hamer-Morton is the co-founder of Deadlocked Escape Rooms and has created a number of physical escape rooms in the United Kingdom. James is also a working actor with involvement in immersive experiences, and lives in Reading, England.