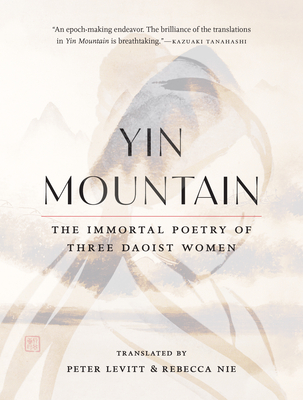 Translated by  Rebecca Nie , Peter Levitt
$ 19.95
Pre-Order (Not Yet Published)

Yin Mountain presents a fascinating window onto the lives of three Tang Dynasty Daoist women poets. Li Ye (c. 734–784), Xue Tao (c. 768–832), and Yu Xuanji (843–868) lived and wrote during the period when Chinese poetry reached its greatest height. Yet while the names of the male poets of this era, such as Tu Fu, Li Bo, and Wang Wei, are all easily recognized, the names of its accomplished women poets are hardly known at all.

Through the lenses of mysticism, naturalism, and ordinary life, the five dozen poems collected here express these women’s profound devotion to Daoist spiritual practice. Their interweaving of plain but poignant and revealing speech with a compelling and inventive use of imagery expresses their creative relationship to the myths, legends, and traditions of Daoist Goddess culture. Also woven throughout the rich tapestry of their writing are their sensuality and their hard-wrought, candid emotions about their personal loves and losses. Despite that these poets’ extraordinary skills were recognized during their lifetimes, as women they struggled relentlessly for artistic, emotional, and financial independence befitting their talent. The poems exude the charged charisma of their refusal to hold back within a culture, much like our own, that was cosmopolitan yet still restrictive of women's freedom.

Skillfully introduced and translated by acclaimed translators Peter Levitt and Rebecca Nie, these wonderful poems will resonate with the lives of spiritual practitioners today, especially women.

PETER LEVITT is the guiding teacher of the Salt Spring Zen Circle community in British Columbia, and he is the author of ten books of poetry, including Within Within, One Hundred Butterflies, and Bright Root, Dark Root. He is also the author of Fingerpainting on the Moon: Writing and Creativity as a Path to Freedom, cotranslator and editor (with Kazuaki Tanahashi) of A Flock of Fools: Ancient Buddhist Tales of Wisdom and Laughter and The Essential Dogen: Writings of the Great Zen Master, and the editor of Thich Nhat Hanh’s classic The Heart of Understanding. In 1989, Levitt received the prestigious Lannan Foundation Award in Poetry.

REBECCA NIE is a transmitted Chinese American Zen master of the Jogye Order, scholar, and award-winning algorithm and new media artist. Born and raised in China, she came of age in Canada and the United States, and now she serves as the Buddhist Chaplain-Affiliate at Stanford University. Ms. Nie is also the founding abbot of M.V. Seon Sanctuary, dedicated to unleashing humanity's full potential through artistic expressions and offering systematic training in Eastern wisdom-spiritual traditions.