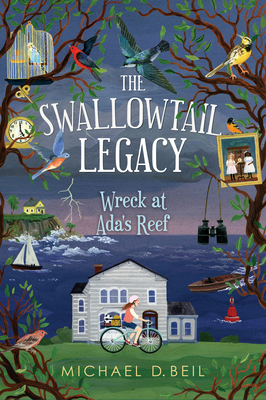 By  Michael D. Beil
Hardcover
$ 17.99
Out of Stock In Store (Available to Order)

A vibrant contemporary mystery with a classic feel about grappling with grief, righting past wrongs, redefining family, and finding yourself.

Twelve-year-old Lark Heron-Finch is steeling herself to spend the summer on Swallowtail Island off the shores of Lake Erie. It's the first time she and her sister will have seen the old house since their mom passed away. The island's always been full of happy memories—and with a step father and his boys and no mom, now everything is different.

When Nadine, a close family friend, tells Lark about a tragic boat accident that happened off the coast many years before, Lark's enthralled with the story. Nadine's working on a book about Dinah Purdy, Swallowtail's oldest resident who had a connection to the crash, and she's sure that the accident was not as it appeared. Impressed by Lark's keen eye, she hires her as her research assistant for the summer.

And then Lark discovers something amazing. Something that could change Dinah's life. Something linked to the crash and to her own family's history with Swallowtail. But there are others on the island who would do anything to keep the truth buried in the watery depths of the past.

A compelling and complex mystery with a classic feel, Wreck at Ada's Reef is a perfect coming-of-age middle grade novel for fans of The Parker Inheritance, Holes, The Westing Game, and anyone looking for a satisfying puzzle that stretches across decades.

In a time not long after the fifth extinction event, Edgar Award-nominated author Michael D. Beil came of age on the shores of Pymatuning Lake, where the ducks walk on the fish. (Look it up. Seriously.) He is the author of the Red Blazer Girls series, Summer at Forsaken Lake, Lantern Sam and the Blue Streak Bandits, and Agents of the Glass: A New Recruit. For reasons that can’t be disclosed until September 28, 2041, he now lives somewhere in Portugal with his wife and their two white cats, Bruno and Maisie. He still gets carsick if he has to ride in the back seat for long and feels a little guilty that he doesn’t keep a journal. For more on the author and his books, visit him online at www.michaeldbeil.com.