Camels in the Biblical World (History #10) 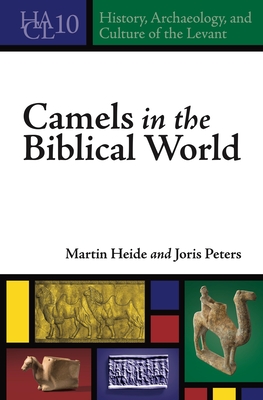 Camels in the Biblical World (History #10)

Camels are first mentioned in the Bible as the movable property of Abraham. During the early monarchy, they feature prominently as long-distance mounts for the Queen of Sheba, and almost a millennium later, the Gospels tell us about the impossibility of a camel passing through a needle's eye. Given the limited extrabiblical evidence for camels before circa 1000 BCE, a thorough investigation of the spatio-temporal history of the camel in the ancient Near and Middle East is necessary to understand their early appearance in the Hebrew Bible.

Camels in the Biblical World is a two-part study that charts the cultural trajectories of two domestic species--the two-humped or Bactrian camel (Camelus bactrianus) and the one-humped or Arabian camel (Camelus dromedarius)--from the fourth through first millennium BCE and up to the first century CE. Drawing on archaeological camel remains, iconography, inscriptions, and other text sources, the first part reappraises the published data on the species' domestication and early exploitation in their respective regions of origin. The second part takes a critical look at the various references to camels in the Hebrew Bible and the Gospels, providing a detailed philological analysis of each text and referring to archaeological data and zoological observations whenever appropriate.

A state-of-the-art evaluation of the cultural history of the camel and its role in the biblical world, this volume brings the humanities into dialogue with the natural sciences. The novel insights here serve scholars in disciplines as diverse as biblical studies, (zoo)archaeology, history, and philology.