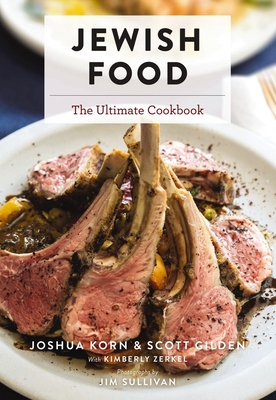 Jewish Food: The Ultimate Cookbook is a beautiful and thorough collection of recipes drawn from Jewish traditions and inspired by the contemporary international cultures rooted in this incredible cuisine.

The over 300 recipes featured in Jewish Food: The Ultimate Cookbook span traditional High Holiday preparations and contemporary spins on dishes that reach back thousands of years. Learn the history of Jewish food traditions and come to understand how strict religious guidelines coexist with food that is not religious but deeply cultural, and how some of this food has evolved over time as it has traveled the globe and embraced European, Asian, and New World influences. Thisbeautiful and thorough collection of recipes draws from Jewish traditions and is inspired by the contemporary international cultures rooted in this incredible cuisine.

Chef Joshua Korn a graduate of the Culinary Institute of America gained his experience working in the family of restaurant kitchens at B.R. GUEST Inc., MYRIAD RESTAURANT GROUP, and STARWOOD CAPITAL HOLDINGS in New York City. A former Chef Instructor at the Art Institute of San Diego, he provided culinary and baccalaureate education to students of the San Diego community for over 11 years.

His critically acclaimed American Regional Food has been honored in the pages of the Food and Wine Magazine, The New York Times, The NY Post, Art Culinaire, Food Arts Magazine, Gourmet Magazine, The North County Times, Ranch Coast Magazine and the San Diego Union Tribune. Korn was highlighted in Forbes Fortune 500 list in 2008 & 2010 as top culinary innovator for his work at Qualcomm Inc. He has appeared on the Bravo Network, Food Network, and Inside Edition television shows in New York City, Orange County and KUSI Television Network in San Diego.

Korn has cooked for multiple celebrities such as Robert DeNiro, Cindy Crawford, Nicole Kidman, Senator Hillary Clinton and myriad noteworthy personalities at Mira-Max film studios in Tribeca, New York. He is an active member of several industry organizations including the American Institute of Food and Wine, the International Association of Culinary Professionals and Confre´rie De La Chai^ne Des Ro^tisseurs Society. Korn serves as a member on several Board of Directors for international and domestic firms, providing insight, thought leadership and advisory.

Korn has broadened his education in the hospitality industry both in business and finance by earning his bachelor's degree in Accounting from Stony Brook University and continued his education as an MBA in Corporate Finance from Argosy University. Joshua is the owner of Culimetrics, LLC, SIE Culinary Management Group, LLC, & Bambucha Kombucha, LLC in Southern California.

He guides his operations to enhance the brand with emphasis on fresh quality ingredients, sustainability and the highest customer experience.  Scott was highlighted in Forbes Fortune 500 list in 2008 & 2010 for culinary innovation for his work at Qualcomm Inc.

Growing up in New York his early career began as the assistant manager at Gallagher’s Steak House, followed by a leadership position at the Columbia University Faculty House, and hospitality management roles with various restaurants around New York City. Catering has been a large part of Gilden's career, ranging from large scale events to private locations for executives. His creativity and service execution deliver exceptional events that exceed expectations.

Gilden is also a former Hospitality Instructor at Gibbs College of New York City and the Art Institute of San Diego. He is a member of Confrérie De La Chaîne Des Rôtisseurs Society and the National Restaurant Association.

Kimberly Zerkel is a freelance writer originally from Joplin, Missouri. After a decade of living in Paris, where she obtained a Master's Degree in Comparative Literature and Translation Studies from The Sorbonne, she returned to the United States to reside in San Francisco, California. It was there where she discovered her love of all things food, wine, and hospitality. She is a contributor to the San Francisco Chronicle and Represent Collaborative, amongst other publications. She currently resides back in her hometown of Joplin.