Suppliers to the Confederacy Volume Four: From Brass Pins, Pistols & Swords to Warships 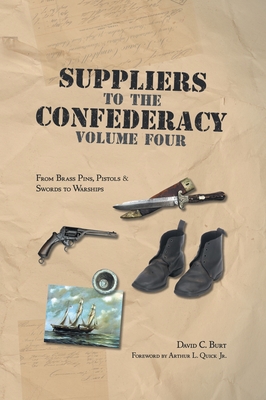 Suppliers to the Confederacy Volume Four: From Brass Pins, Pistols & Swords to Warships

This new research begins with the story of the importance of the city of Liverpool to the Confederacy and the companies and individuals that made this possible. The book goes on to feature detailed photographs of newly-surfaced war materiel ranging from the smallest of British exported items such as buttons, brass pins, bullets, bullet molds, carbine snap hooks, belt buckles, pistols, swords and boots through to the mighty British- built warships like the CSS Florida, Shenandoah and Alabama - as well as the companies behind them. There are six all-new appendices - Victims of the Shenandoah - Officers of the Shenandoah - When the American Civil War Came to Southampton, England - Blockade Runners Registered at Liverpool Between 1863-1865 and The Alabama Claims, 1869-1872.

The final appendix features brand new exclusive photographs submitted by collectors and other historians of yet more Confederate soldiers pictured with imported British arms and equipment.