Net Positive: How Courageous Companies Thrive by Giving More Than They Take 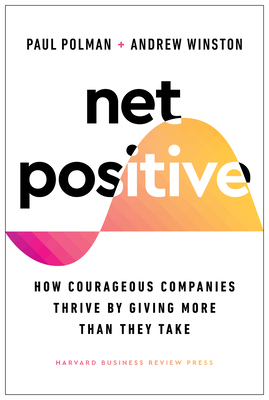 Net Positive: How Courageous Companies Thrive by Giving More Than They Take

By  Paul Polman , Andrew Winston
Hardcover
$ 30.00
Out of Stock In Store

A Financial Times Best Business Book of the Year

"An advocate of sustainable capitalism explains how it's done" -- The Economist

"Polman's new book with the sustainable business expert Andrew Winston...argues that it's profitable to do business with the goal of making the world better." -- The New York Times

"...Polman has been one of the most significant chief executives of his era and that his approach to business and its role in society has been both valuable and path-breaking." -- Financial Times

The ex-Unilever CEO who increased his shareholders' returns by 300% while ensuring the company ranked #1 in the world for sustainability for eleven years running has, for the first time, revealed how to do it. Teaming up with Andrew Winston, one of the world's most authoritative voices on corporate sustainability, Paul Polman shows business leaders how to take on humanity's greatest and most urgent challenges--climate change and inequality--and build a thriving business as a result.

In this candid and straight-talking handbook, Polman and Winston reveal the secrets of Unilever's success and pull back the curtain on some of the world's most powerful c-suites. Net Positive boldly argues that the companies of the future will profit by fixing the world's problems, not creating them.

Together the authors explode our most prevalent corporate myths: from the idea that business' only function is to maximise profits, to the na ve hope that Corporate Social Responsibility will save our species from disaster. These approaches, they argue, are destined for the graveyard. Instead, they show corporate leaders how to make their companies "Net Positive"--thriving by giving back more to the world than they take. Net Positive companies unleash innovation, build trust, attract the best people, thrill customers, and secure lasting success, all by helping create stronger, more inclusive societies and a healthier planet. Heal the world first, they argue, and you'll satisfy your investors as a result.

With ambitious vision and compelling stories, Net Positive will teach you how to find the inner purpose and courage you need to embrace the only business model that will matter in the years ahead. You will learn how to lead others and unlock your company's soul, while setting and delivering big and aggressive goals, and taking responsibility for all of your company's impacts. You'll find out the secrets to partnering with others, including your competition and critics, to drive transformative change from which you will prosper. You'll build a company that serves your people, your customers, your communities, your shareholders--and your children and grandchildren will thank you for it.

Is this win-win for business and humanity too good to be true? Don't believe it. The world's smartest CEOs are already taking their companies on the Net Positive journey and benefitting as a result. Will you be left behind?

Join the movement at netpositive.world