With a Star in My Hand 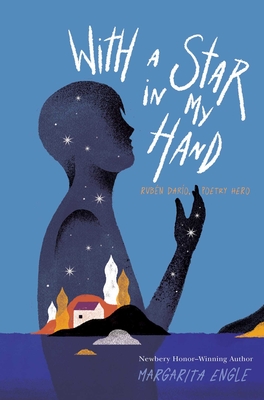 With a Star in My Hand

From acclaimed author Margarita Engle comes a gorgeous novel in verse about Rub n Dar o, the Nicaraguan poet and folk hero who initiated the literary movement of Modernismo. As a little boy, Rub n Dar o loved to listen to his great uncle, a man who told tall tales in a booming, larger-than-life voice. Rub n quickly learned the magic of storytelling, and discovered the rapture and beauty of verse. A restless and romantic soul, Rub n traveled across Central and South America seeking adventure and connection. As he discovered new places and new loves, he wrote poems to express his wild storm of feelings. But the traditional forms felt too restrictive. He began to improvise his own poetic forms so he could capture the entire world in his words. At the age of twenty-one, he published his first book Azul, which heralded a vibrant new literary movement called Modernismo that blended poetry and prose into something magical. In gorgeous poems of her own, Margarita Engle tells the story of this passionate young man who revolutionized world literature.