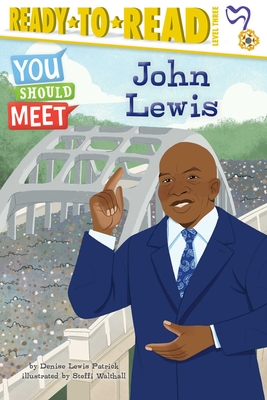 By  Denise Lewis Patrick , Illustrated By  Steffi Walthall
Hardcover
$ 17.99
Out of Stock In Store (Available to Order)

Get to know John Lewis, social justice activist and politician, in this fascinating nonfiction Level 3 Ready-to-Read, part of a series of biographies about people “you should meet!”

Meet John Lewis. When John Lewis was a teenager, he asked Dr. Martin Luther King Jr. to help integrate a segregated school in his hometown. From then on, John Lewis never stopped organizing, from Freedom Rides, to the marches in Selma and Washington, and more. He believed in getting into “good trouble” for good causes, and became a Civil Rights activist and United States Representative. It’s never too early to introduce readers to his concept of getting into “good trouble,” and to get to know John Lewis.

A special section at the back of the book includes extras like information about other activists around the world, tips for how readers can get into “good trouble” for causes they believe in, and more.

Denise Lewis Patrick was born in Natchitoches, Louisiana. She attended local schools and earned a degree in Journalism from Northwestern State University of Louisiana in 1977. That same year, she moved to New York City. She has been both a writer and editor in various areas of the publishing industry, particularly for children. In addition to being a published author, Denise is an adjunct professor of writing at a local college. She’s also worked with budding writers in an afterschool program, has managed middle and high school writing programs.

Steffi Walthall is an illustrator and character designer born and raised in Virginia. She received her BFA in Game Development from the Savannah College of Art & Design (SCAD). Steffi focuses on crafting a diverse range of characters and unique stories, and recently illustrated J.E. Bright’s Wonder Woman: The Way of the Amazons. For more information about Steffi, please visit SteffiWalthallArt.com.